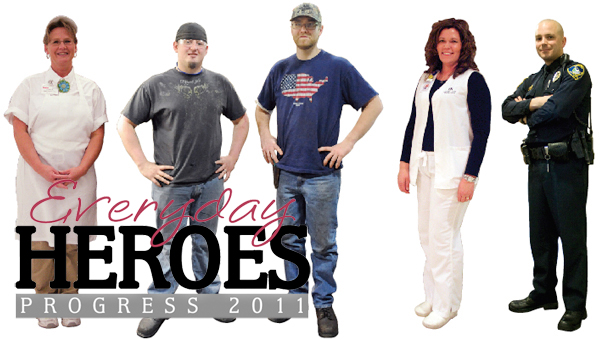 Odd Job Workers of Albert Lea. This feature is a sneak preview of what readers can expect in the Progress Edition, which publishes next Sunday. The theme for the 2011 Progress Edition is Everyday Heroes. These people who work odd hours clearly qualify, in our view.

Editor’s note: This feature is a sneak preview of what readers can expect in the Progress Edition, which publishes next Sunday. The theme for the 2011 Progress Edition is Everyday Heroes. These people who work odd hours clearly qualify, in our view.

Working unusual hours is no easy role in society.

They are asleep when everyone else is awake. They are working when everyone else has free time. And everyone else seems to expect them to conform to normal schedules for everyday things, like running errands to the bank, insurance provider, courthouse, school or doctor. Bosses often want staff meetings during regular work hours, too.

Spending holidays with families? Well, that means being awake when you are used to sleeping.

It takes a toll. Studies show people who work night or graveyard shifts pay a price. People who work odd hours end up with disrupted sleep patterns and, thus, suffer an increased risk of health problems, such as heart disease and cancer. The fatigue that results from working odd hours also can increase the rate of accidents and mood swings.

“The biggest thing you have to get used to is your sleep schedule,” said Kyle Arndt, a machinist at Lou-Rich on the second shift, which sometimes extends into the third. “During overtime, we work until 3 a.m. so I am used to being awake late at night. I usually don’t go to bed until 4 or 5 in the morning.”

Pete Conway, a welder at Lou-Rich, works the second shift. He likes it because he is not a morning person, he said.

“Working the second shift you miss out on a lot of family stuff, especially dinner with your family,” he said.

However, his schedule could change as his kids’ schedules change.

“When my kids start going to school I’ll have to go back to third shift; otherwise, I’ll never see them.”

Sometimes, odd hours seem to work well for a person. Angie Deml, a nursing supervisor at Albert Lea Medical Center, said she sleeps well while her kids are at school and usually spends time with them in the evening before going to work.

“I love hands-on nursing care, which I get to do more of on the night shift,” she said. “I enjoy being the go-to person.”

Patients, nurses and doctors rely on her to know what’s happening throughout the hospital and to make decisions without the benefit of other staff members, such as dietary or maintenance workers. “I’m never bored because people need 24-hour care. People aren’t sleeping if they’re sick so it’s always busy.”

Remember the 1983 classic commercial of the guy who worked for Dunkin Donuts? He rolled out of bed and said over and over, “Time to make the doughnuts.” People know bakers get up early.

“The doughnut icers come in at midnight and the bakers come in around 1 a.m. to start the orders,” said Cindy Peterson, an assistant bakery manager at Hy-Vee. “And even though 1 a.m. seems early, it’s the fastest eight- to nine-hour shift of the day. You’re so focused, there aren’t many customer interruptions and it’s a very high production time — a lot of physical activity.”

Sleep beforehand is key to making that time so productive.

“Your sleeping schedule is kind of goofy. I try to nap during the day and then be in bed by 7 to get four to five hours of sleep before going in.”

Albert Lea police officer Jason Taylor, who usually works from 9 p.m. to 7 a.m., said officers respond to different kinds of activity at night than they typically do during the day.

“Your average folks are sound asleep in bed, and a lot more strange and different things happen,” he said.

A lot of times, this means more action-packed calls.

Taylor said he enjoys working the night shift, though it does have its challenges.

“It’s always a struggle to balance everyday, normal activities that people do during the day,” he said. “You get used to having leftovers on holidays.”

Base of operations: Hy-Vee, Albert Lea

Origin: Peterson began working part-time at the Hy-Vee bakery when she was in high school. Although she didn’t plan to still be there 31 years later, it’s a choice she’s never regretted.

Peterson worked her way up the ranks and served as the bakery manager from 1988 until 1998, until after the store finished its remodel.

Peterson comes in anytime between 1 a.m. and 6 a.m., depending on the schedule and who’s doing what that day.

Base of operations: Albert Lea

Superpowers: can run a vast amount of machines

Origin: Arndt graduated from Riverland Community College in 2005 as a machinist. He worked in various shops before his wife’s uncle, who also works at Lou-Rich, recommended he apply at the company.

Base of operations: Albert Lea

Superpower: Conway is a hard worker who understands his job and is flexible.

Kryptonite: trying to not bring personal life to work

Origin: Conway worked at McNeilus Steel in Dodge Center where he received on-the-job training in welding before the shop closed. He worked with Arndt in the past, who referred him to Lou-Rich.

Kryptonite: lack of resources when working overnight including the pharmacy being closed, and little maintenance or dietary staff

Origin: Deml started at ALMC 17 years ago and has worked on the night shift for 15 years. She said she loves working evenings because she can make lots of decisions, and it allows her to work all over the hospital wherever she’s needed including the emergency room or The Baby Place. She said working the night shift, 7 p.m. to 7 a.m., works well for her family.

Superpowers: Taylor is involved with numerous community causes. He serves as a city councilor in Emmons, has been active with planning Emmons Borderfest since 2003 and has been awarded a Community Service Award in the past.

Kryptonite: Dealing with animal control issues in his normal duties as an officer, Taylor has developed a soft spot for animals. He has adopted four of the cats that have been turned into the city animal shelter since he’s worked in Albert Lea.

Origin: Originally from Duluth, Taylor started with the Albert Lea Police Department in 2000.

He’s always worked evenings or nights as a patrol officer.