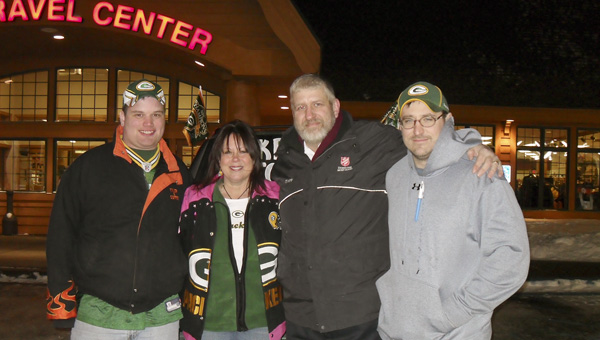 A Green Bay Packers fan from Wisconsin has put her team spirit to good use this week as she traveled to the Super Bowl.

Driving from Wisconsin to Texas, Sue Decker and a few family members from Marshfield, Wis., — under the name Packer Fans Paying it Forward — donated food to a different food pantry in every state they passed through.

But the group didn’t just donate regular commodities such as boxed pasta or canned vegetables at each stop — they donated trademark Wisconsin foods of brats and cheese.

The food had been donated by area businesses where Decker lives.

Brickson said he got a call from local police officers notifying him that the people were going to stop by the Salvation Army.

Decker picked towns randomly along her journey and then called local law enforcement to make arrangements.

He noted that the Salvation Army planned to serve the brats and cheese at its community meal site Friday.

21 Tigersharks are heading to state