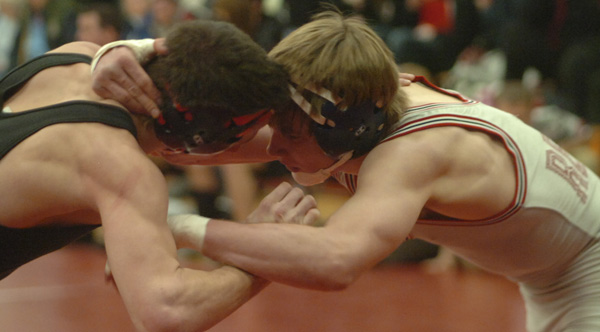 The Rebels and Panthers were tied 20-20 heading into the 189 pound match.

Thisius held a 6-5 lead heading into the third period until Petranek scored a takedown with under a minute remaining to push the match into overtime.

In overtime, Petranek scored a takedown and finished with a pin right before the buzzer sounded to secure the victory over Thisius.

The Rebels then forfeited the 215 pound match to seal the 32-23 victory for NRHEG.

With the win over the Rebels, the Panthers secured the Gopher Conference title.

The Rebels started out with an early 11-0 lead after USC’s Jacob Gonsalez scored a major decision over Tyler Logan at 119 pounds.

The 125 pound match found two-ranked wrestlers doing battle as Dylan Herman, ranked fifth at 112 pounds in Class A, faced off with NRHEG’s Dustin Esplan, who is ranked ninth at 119 pounds in Class A.

The Panthers took the lead in the match at 152 pounds as Dillion Parpart earned a decision over Logan Sonnek to give NRHEG a 16-14 lead.

NRHEG’s Mitch Akemann then earned a major decision over USC’s Travis Brown to push the Panthers lead to 20-14.

USC then countered as Colten Carlson earned a fall in three minutes and one second over NRHEG’s Matt Dahle to tie the score up at 20-20.

Petranek earned the fall in overtime at 189 and the Panthers received a forfeit at 215 pounds to secure the win.

While the lower weights gave the Rebels a chance to win, the Panthers succeeded in getting bonus points in the upper weights to pull away.

“Our lower weights put us in a position where we should have won,” USC coach Marcus Eytcheson said. “Our captains didn’t close the deal for us. We had the match won and let it get away.”

The Rebels bounced back after the loss as they defeated Montgomery-Lonsdale-Le Center 40-31, while NRHEG downed Maple River 44-17.

USC is back in action at 6 p.m. on Monday as they host Blooming Prairie and W-E-M/J-W-P.