Rebels ride 1st half past Tigers 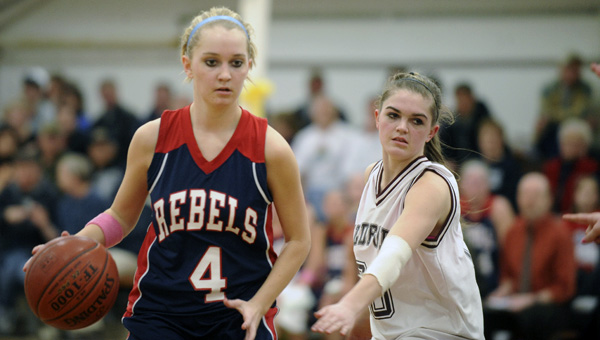 WELLS — The United South Central Rebels girls’ basketball team pulled away from the Medford Tigers Friday in the first half with a 25-2 run, including 19 unanswered points.

Kayla Stenzel scored the Rebels first five points as the team built a 5-2 lead three minutes into the game. Medford’s Alicia Ahlf knocked down a pair of free throws to pull the Tigers (4-17, 2-14) within 5-4 before the Rebels opened up a 24-4 lead with 19 straight points.

The Rebels, winners of 13 of their last 14 games, had balanced scoring all night as not one player scored more than two baskets on the 19-0 run.

Stenzel finished with a game-high 13 points and 13 rebounds. Ovrebo chipped in seven points and Danielle Koestler and Amanda Allis each scored six.

The Rebels outrebounded the Tigers 39-25 and had 12 turnovers.

The Rebels play their final regular season home game of the season at 7:30 p.m. Tuesday against Granada-Huntley-East Chain (11-8, 8-3 Valley). If the Rebels win their final game of the season Thursday at Waterville-Elysian-Morristown (13-10, 8-6), they will tie New Richland-Hartland-Ellendale-Geneva for their first Gopher Conference championship in school history.