Soldiers get ready for Iraq 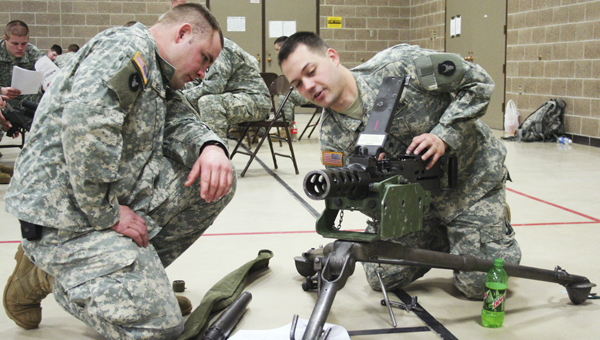 While several local soldiers are taking their first steps in preparing for a yearlong deployment overseas, the family members they will leave behind remain top of mind for many.

“If our families are cared for, it enables us to stay focused on the welfare of our soldiers and ourselves,” said Capt. Samuel Andrews, commander of Delta Company, 2nd Battalion, 135th Infantry Regiment, 34th Infantry Division. “If his head isn’t in the game, his actions could cost his soldiers and himself their lives.”

About 100 soldiers from the Albert Lea unit of the Minnesota Army National Guard were notified in January they will be deployed for one year in support of Operation New Dawn, which is the name of the U.S. drawdown phase of the Iraq War. These Delta Company soldiers gathered at the National Guard Armory in Albert Lea last weekend as part of their monthly drill, brushing up on some things and preparing themselves for the upcoming deployment.

Their tasks were pretty routine as far as drills go: Gunnery tests, assembly and disassembly of weapons, putting on chemical/biowarfare suits, understanding rules of engagement and proper use of applying force. Reviewing equipment records and developing a range card to help with communications in the field were other areas they reviewed.

“This is a time to brush up on what they’ve already learned and fulfill training requirements handed down by the Army,” said Andrews. “This isn’t necessarily new stuff.” 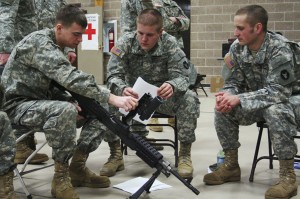 One thing many of the soldiers were doing specifically to prepare for their pending deployment, however, was updating their personnel files. Soldiers took turns filing in and out of an office at the armory, updating their medical and legal information, making sure the Army has their most updated wills and power of attorney information on file.

This type of preparedness is important, Andrews said, because the more prepared families can be for any potential situation, the better.

“Life still goes on back home, so we have to make sure everything’s ready for them if anything happens,” Andrews said.

This was exactly why on the last day of drill, the Family Readiness Group was holding a potluck at the armory.

FRG is an officially command-sponsored organization of family members, volunteers and soldiers belonging to a unit that provides mutual support and assistance, and a network of communications among the family members, the chain of command and community. 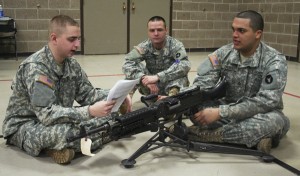 Tammy Estes is the coordinator of the Albert Lea chapter, which meets once a month. The February meeting was an informal event allowing military families to come together, ask questions and get to know one another, in turn strengthening the bond of support they’ll inevitably lean on once their spouse or loved one is deployed.

FRG covers a wide area of needs that will help families as their loved one is deployed, such as offering computer classes to teach Skype and training classes on the correct way to fill out customs forms and send care packages overseas.

Something perhaps people don’t want to discuss, but is a must in their line of duty, is dealing with life-changing experiences, such as births and deaths, and how Army casualty notifications work.

“When significant events happen in life back home, you feel sort of powerless,” Andrews said. “If your spouse doesn’t have a strong support system back home, it’s just human nature to focus on that.”

Andrews is preparing for his fifth deployment, and while he has an understanding this time of what he and his wife will go through, their children are a little older now, which makes every deployment just a little different. 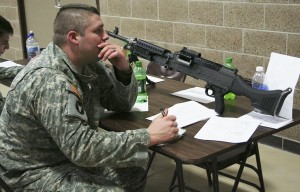 Estes, whose husband, Tom, is also preparing to deploy for his fifth time, said programs offering child care resources, such as Operation Military Kids, are invaluable for families with young children. In fact, preparing their three children is something they’ve already begun in their home.

“Our biggest thing is how the children would react,” Estes said. “This time my children are old enough to write their own e-mails, so it’s something they can be excited about when their dad is gone.”

She recommended being completely open with children and their school teachers about the deployment, as this will only benefit everyone, from the children to their friends and classmates.

First Sgt. Matt Price of Farmington, who reports to the Albert Lea unit, also spoke highly of Beyond the Yellow Ribbon.

Beyond the Yellow Ribbon is a program that encourages members of the community to offer simple acts of service toward military members and their families. Simple acts include things like shoveling a driveway, babysitting or even offering up a kind word.

With a wife and three children back home, Price said it gives him comfort to know there’s another support system in place.

“If my wife ever needs anything, I know I can’t fix it but I can help by making suggestions and with this, I know she’s taken care of,” Price said.

Just last week, Andrews spoke to the Albert Lea City Council about becoming a Yellow Ribbon City, which would include putting a comprehensive support plan in place and getting final approval by the governor.

Estes wants people to know this chapter isn’t just for local Army National Guard families, but for any local family with a member in any branch of the military, no matter where they report for drill. She can be reached by phone at 918-977-0892 or e-mail at deltafrg2.135@gmail.com.

Delta Company soldiers called to serve Operation New Dawn will leave May 22, first heading to pre-deployment training at Fort McCoy, Wis. before shipping out overseas to Kuwait, which Army officials expect to happen by late summer.