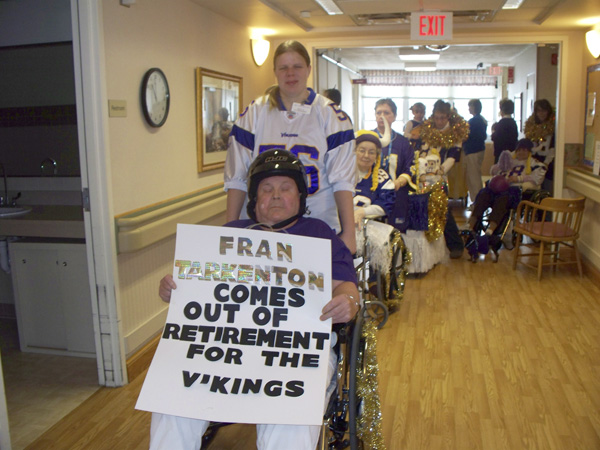 One group decided to dress up as Minnesota Vikings for the Hazzle Dazzle Parade on Jan. 26. -- Submitted photo

Residents at St. John’s Lutheran Home had a special treat on Jan. 26 to break up the dreary winter months. 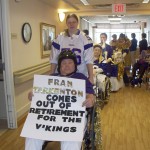 One group decided to dress up as Minnesota Vikings for the Hazzle Dazzle Parade on Jan. 26. -- Submitted photo

Activities Director Diane Wichmann said she was trying to think of something to do that would be different, and she never imagined it would grow so large.

“Everyone likes a parade,” Wichmann said. “We wanted to do floats.”

And so the Hazzle Dazzle Parade was born, and Wichmann said so many people liked it that they’ll probably do it next year too. Neighborhood coordinators went out to ask residents if they wanted to make floats out of carts or wagons. Those who didn’t participate were able to watch the whole parade right from their doorways.

Children from the daycare center joined in the parade and groups of staff members also signed up to create floats. Some entries had live music or lights, and Wichmann said all the residents enjoyed seeing people dressed up. 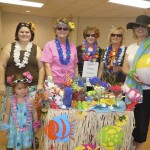 Some social workers and day care children dressed up with a Hawaiian theme for the Hazzle Dazzle Parade on Jan. 26. — Submitted photo

“It was just so fun,” Wichmann said. “We didn’t realize how much fun we would have.”

The parade was in conjunction with a carnival that afternoon that had ice fishing, a snowball toss and a cake walk.

“They just loved that,” Wichmann said of the residents.

Winners in the parade were Larry Kimpell for most outrageous, Elaine Burkhardt, Colleen Gabel and Carla Reichel for most original and Marlys Johnson for most dazzling. Johnson also won winter carnival queen.

“Winter just gets to be so long,” Wichmann said. “I’ve never seen the staff have so much fun doing an event — everyone just had a great time.”