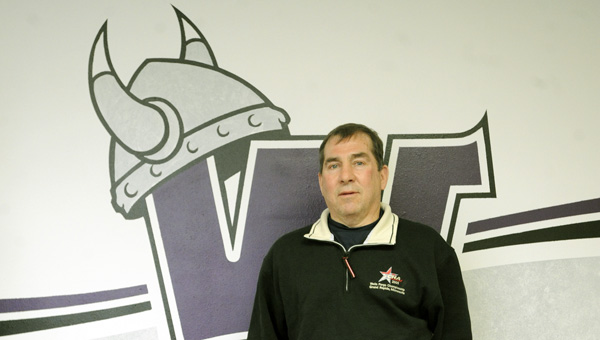 He hopes his future players do, too.

“I want guys who have a passion for hockey and want to be out there and play the game,” Doug Ross said from his new office on Waldorf’s campus. “Maybe someday we can bring a championship to Albert Lea.”

If that’s the goal, Waldorf has found the right man to jumpstart its newest athletic program.

Ross was the head coach for the University of Alabama-Huntsville Chargers men’s hockey team for 25 years.

He joined the team in 1983 when the Chargers were only a club team, much like Waldorf will be in its inaugural season this fall. In 1983 and 1984, Ross led the Chargers to consecutive National Club Championships and a runner-up finish in 1985. After one season in the NAIA, the Chargers moved to NCAA Division II for the 1986-87 season. Ten years later, the Chargers won their first Division II national championship over the Bemidji State Beavers and won another national title in 1998 again over the Beavers.

For the 1999-2000 season, the Chargers moved to NCAA Division I and into the College Hockey America Conference. Ross coached the team to conference titles in 2001 and 2003 and a tournament title in 2007. Ross retired following the 2007 season to spend more time with family and to watch his son, Jared, 27, play hockey with the Philadelphia Flyers, but not before leading the Chargers to their first NCAA tournament appearance in school history. The Chargers lost to Notre Dame in the first round.

Now with Waldorf, Ross hopes to accomplish the same things in Forest City and Albert Lea, that he was able to do in Huntsville.

But what was it that spurred him to return to coaching?

“I was still interested in hockey,” Ross said. “I have two sons at Waldorf and that got me back into the education and hockey business.”

Ross’ sons, Jarrett, 19, and Colby, 24, both plan on playing for the Waldorf hockey team this fall and are two of several players committed to the team already. Ross hopes to have 25 players on his team before the season starts and said it would be nice if they were all from Minnesota.

“I’m looking for somebody who has a strong academic background, good character and sportsmanship,” Ross said. “I want kids who want to go to Waldorf because we have a degree they’re interested in and they can also play hockey.”

Ross said he besides Minnesota, he also has recruiting connections in Michigan, Indianapolis and Canada. He will also tap into Iowa, especially the Mason City area.

“I don’t know who will end up here,” he said. “But we want a lot of Minnesota kids.”

Ross is excited about playing in Albert Lea and is impressed with the City Arena. He said he particularly liked the locker room area and that the arena has two rinks.

“We’re glad to be playing there,” Ross said. “Albert Lea and the City Arena are really focused on ice hockey. We’re going to try and run the program as best as we can there. Players can hang up their equipment in the locker room and leave it there. We’re going to look good and hopefully we’ll play good.”

This fall, Ross hopes to field a competitive team in the program’s first season.

“A lot of that has to do with a good schedule that we can be competitive with,” he said. “After the first year we will reevaluate.”

Ross also hopes that Waldorf College athletics as a whole moves from NAIA to NCAA Division III. He said there is no NAIA championship for hockey and that scheduling games would be easier in the NCAA.

But more than anything Ross wants to win and is looking for players to help him do that.

“I want players who have good skills and speed,” he said. “I want players who are aggressive with forechecking and keep their legs moving. I like to play four lines and we need to stay out of the penalty box to do that. We will play a disciplined game and I want them to be in really good shape. I like to get a lot of flow going from the bench.”

Ross also said that in practice he stresses fundamentals like skating, stick handling, passing and timing.

Ross grew up in Deerborn, Mich., just miles west of Detroit. He started playing hockey at age 11 but never indoors. He only played outside, usually on the rink his dad built him in his backyard.

His high school didn’t have a team so Ross began playing organized hockey in 1970-71 for the Detroit Junior Red Wings and won a Southern Ontario Championship in his first and only season with the team. He then played college hockey at Lake Superior State in Marie, Mich. and won an NAIA national title before transferring to Bowling Green University to be closer to family.

In 1976, Ross played on the USA Olympic team in Innsbruck, Austria, where he was coached by Minneapolis native Bob Johnson. The team finished in fifth place. Ross played some professional hockey, but not much, and gave up playing for a coaching career.