Many of the instructors at Albert Lea High School could be called everyday heroes, but one in particular spends much of her time outside of school hours helping students as well. 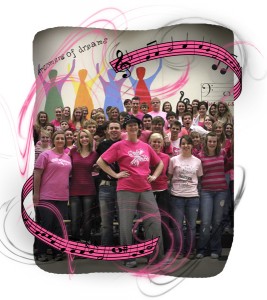 Diane Heaney, center, stands with some of the members of the concert choir. -- Photo by Kelli Lageson/Graphic by Stacey Bahr

Diane Heaney, choir director at ALHS, directs seven choirs as well as instructs anywhere from 100 to 150 voice lessons every two weeks. During the school day she instructs three choirs. Before school she has rehearsals for the show choirs and the smaller select choirs like Chorale and Caroliers.

One would think with all Heaney does before and during school that she would take some time for herself after school, but she is the musical director for various school shows, which involves after school work. Heaney said she doesn’t mind all the work she does because all the choirs are important.

“We have to operate like a small school,” Heaney said.

Heaney said the toughest part of her job is picking music for all seven choirs, because it must be fun for the kids, help them learn and be a good fit for their age group. Other factors she considers include having varied styles of music and what the audience will want to hear.

“You can recycle some favorites,” Heaney said.

The Tiger choir, made up of ninth-graders, is especially hard for Heaney to find music for because their voices are changing at that age, and much of the music for that age group is lacking.

“A lot of music for that age is insipid,” Heaney said.

She said she likes to challenge her students by having them sing different languages and said they always adapt well. Heaney said breaking bad singing habits is a big part of her job as well. She describes herself as a late bloomer with her voice and said it helps her teach students how to sing because she had to learn herself.

“I understand how kids feel,” Heaney said. “That helps me to fix issues.”

She said she has friends who are natural singers who say they wouldn’t know how to teach singing because it comes naturally to them.

Not only in Heaney a hero because she spends so much of her time helping students become better singers, she now has been battling breast cancer since July. She said teaching is harder because she’s often more tired.

“My body doesn’t always do what I want it to do,” Heaney said.

She said she’s thankful she hasn’t lost her voice, which might have happened had she been diagnosed with another kind of cancer like esophageal or throat. After she was diagnosed she had three surgeries in four weeks and then immediately had to help run a camp at St. Olaf College for the Minnesota Music Educators Association. Though it was hard for her to help, she said the other camp leaders helped her.

“It was nice to have something to do,” Heaney said.

She said having cancer hasn’t changed her life drastically. She planned to start radiation in December and said the outlook was good.

“My husband is a really good caretaker,” Heaney said.

Choirs that Heaney directs are:

Hero: Diane Heaney
Secret identity: Choir director
Base of operations: Albert Lea High School
Superpowers: Good at vocal coaching, cooking and on piano and organ
Kryptonite: A head cold or anything that keeps her from being able to sing
Affiliations: Husband, Clyde Buendorf, daughter, Claire, 16, son, Jack, 12
Origin: Heaney grew up in Kiester and currently lives in the house she grew up in. She studied music education and went to graduate school at the University of Cincinnati. She taught at various schools before coming to Albert Lea High School in 1993.