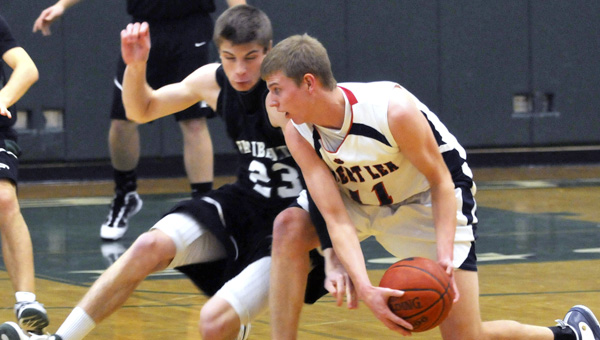 Albert Lea’s Aaron Klatt battles for the ball against Faribault’s Michael Emge during the first half of Friday’s game. -- Tyler Mason/Faribault Daily News

The Albert Lea boys’ basketball team opened with a 16-2 run Friday against the Faribault Falcons and trailed only once in a 79-74 win.

Kyle Ooms led the Tigers and had team-highs with 15 points, 12 rebounds and six assists.

“We were outstanding in our transition game tonight,” Tigers head coach Lucas Kreuscher said. “We did a good job of grabbing rebounds, getting out wide and running.”

The Tigers led 41-38 at halftime before the Falcons went on a 6-2 run and grabbed their only lead of the game 44-43. The Tigers quickly regained the lead and never trailed again.

“I’m proud of the guys for having an answer for every Faribault run,” Kreuscher said. “We got stops when we needed them and that’s really important for us down the stretch.”

Kreuscher also said that Aaron Klatt did a nice job defending Faribault standout Michael Emge. Emge scored 27 points in the game but just 10 in the second half.

“Everybody that played really contributed,” Kreuscher said. “It was a good, quality team win.”

The Tigers play again at 7:30 p.m. Tuesday at Rochester Mayo.