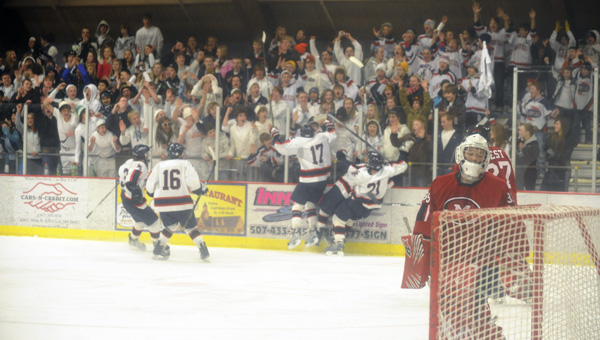 With the Mankato West Scarlets desperately trying to pull even with Albert Lea Tuesday, Eric Carlson scored a game-sealing empty-netter with 22 seconds left, giving him a hat trick and the Tigers a 6-4 win.

By beating the first-place Scarlets, the Tigers (15-6, 8-2) now control their destiny in the chase for a second Big Nine title in three years.

With conference games remaining against Mankato East, Rochester Mayo, Austin and Owatonna, if 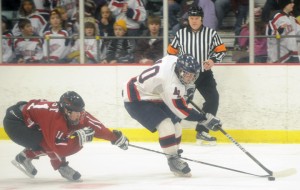 the Tigers win out they’ll claim sole possession of the Big Nine championship. By winning three of four, the worst they can do is tie for it.

The Tigers got off to a fast start Tuesday, scoring four unanswered goals within the game’s first six minutes.

With Darik Weigel in the penalty box, Carlson scored two short-handed breakaway goals within 36 seconds of each other — both unassisted.

The four-goal lead didn’t last long, though, as the Scarlets proved why they’re the highest scoring team in the conference.

Just seventeen seconds after Carlson’s second goal, the Scarlets’ Andrew Frentz scored the first of his three goals to pull West within 4-1.

Frentz added a power-play goal 4:46 into the second period and added a short-handed goal three minutes later to cut the Tigers’ lead to 4-3.

The game grew chippy and tense as the teams were separated by one goal for the first time since 2:50 into the game.

After both teams were denied on scoring chances, the Tigers’ Cody Haaland passed to Falk on a breakaway whose shot deflected of goalie Zach Fox’s right leg pad and into the back of the net.

The Tigers held a 5-3 lead until 11:52 into the third period when Landon Brown’s goal pulled the Scarlets back within one.

With just over one minute left in the game, the Scarlets pulled their goalie hoping to tie the game until Carlson’s empty-netter ended their chance.

“There’s no question about it that every time Albert Lea and Mankato West play it’s going to be a barn-burner,” Nystrom said. “We were fortunate enough to win this one.”

Despite being outscored 6-4, the Scarlets outshot the Tigers 38-27 for the game and 14-3 in the final period.

“The third period was going to be the telltale period and boy did (West) come out smoking,” Nystrom said. “I wish we would have had a better third period against them because now we’ve given them momentum. I’m assuming that if everything works out the way it should, there’s a good possibility we’ll meet them in the section semifinals.”