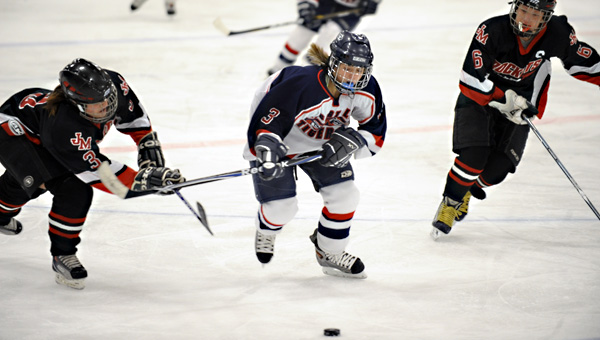 It was a fitting end to the Tigers’ regular season, which saw 10 overtime periods in 24 games.

The Tigers (12-9-3, 8-5-3 Big Nine) have held opponents to an average of two goals per game this season for third-best in the Big Nine Conference.

“The kids have done a great job picking up the systems and a fabulous job playing away from the puck both in the defensive and offensive zone,” first-year Tigers head coach Paul Willet said. “As long as we’re able to keep the opponent under a couple of goals we’re always going to have a chance to win.”

Eighth-grader Sydney Conley, the Tigers’ goalie, has played a big role in that success.

“She’s been fabulous,” Willet said of Conley. “As an eighth-grader, to have close to a 93 percent save percentage is amazing. She’s played well beyond her years and gives us a great shot in sections.”

Conley looked strong again Thursday and she nearly held the Rockets (12-9-2, 8-5-2) scoreless on four power play opportunities and made 25 saves.

The Rockets’ Laura Meillier scored the game’s first goal with 2:10 left in the first period. The Tigers responded quickly as Mariah Leach buried a rebound to tie the game with 40 seconds left in the first. 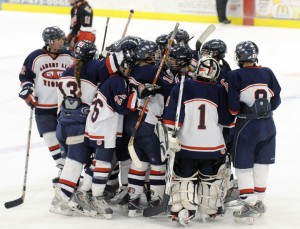 The Tigers pulled ahead 2-1 6:18 into the second period when Megan Pulley snuck in a goal in front of a crowded net.

The Tigers’ Sophia Jepson nearly added an insurance goal seconds later when she stole a pass in the Rockets’ zone and fired an open shot at goalie Mia Bruesewitz, but was stopped with a glove save.

The Rockets’ tied the game with nine seconds left in the second period on a power play but were held scoreless the rest of the game.

Tired of overtime periods, the Tigers wasted little time as Anderson rebounded Sydney Overgaard’s shot for a game-winning goal 2:49 into overtime. The Rockets never got a shot on goal.

“Overgaard got a stick on it and I thought it was going in,” Willet said. “Somehow they kept it out but Anderson crashed hard and buried that thing.”

The Tigers now won or tied in seven of their past nine games heading into the section tournament.

“I love where we’re at right now,” Willet said. “I think we’ve got an outstanding chance to get to the state tournament.”

The Section 2A tournament seeding will be announced Sunday and it is likely the Tigers will receive a No. 2 or 3 seed.

The Tigers first section game will be on Jan. 11 at City Arena.