The United Way of Freeborn County held a lunch and open house to celebrate the 2010 Live United campaign on Wednesday.

The organization raised the second-highest amount of money ever at more than $596,000; the goal was $650,000. The event was a chance for United Way to recognize its board members, volunteers, agency members and campaign members. 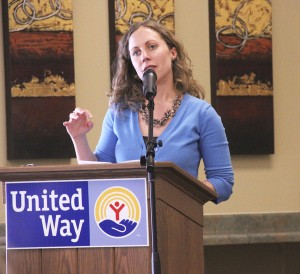 “To raise a total of almost $600,000 is an amazing feat,” United Way Board Chairman Chris Chalmers said.

He said Freeborn County stepped up to meet the needs of others, and even though not all needs were met that every little bit helps. United Way Executive Director Ann Austin said sustainability was the key this year.

“Our community was stretched to the max and still were able to give,” Austin said.

Before the open house, the organization held its annual meeting. During 2010, the United Way of Freeborn County participated in various initiatives to promote community involvement.

It collaborated with other organizations to form Pioneering Healthy Communities, which addresses long-term health concerns in the community. It worked with the Drug Education Task Force to present long-term impacts of drug and alcohol abuse to area students.

The organization is exploring ways to end hunger in Minnesota and is honoring volunteers monthly. About 1,500 books were given to all kindergartners through second-graders in Freeborn County.

The following people and businesses received recognition at the celebration:

Companies in Freeborn County that had 100 percent employee participation in the 2010 United Way campaign:

Advocate of the year: Carlton Frank

Volunteer of the year: Jeff Strom