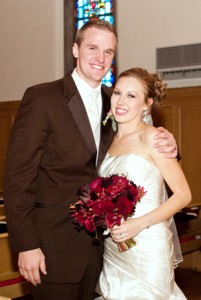 Betsy is the daughter of Neil and Mary Jo Volkman, of Albert Lea. Grandparents of the bride are Johny and Lily Anderson and Doris Volkman, all of Albert Lea.

Mike is the son of Jeff and Penny Polis, of Albert Lea. Grandparents of the groom are Marilyn Polis and Lynn Hendrickson, both of Albert Lea.

Flower girls were Ali and Emily Debe, cousins of the groom, and Alisa Polis, niece of the groom.

Ring Bearer was Zayn Polis, nephew of the groom.

The bride is a 2009 graduate of St. Olaf College with a bachelor’s degree in psychology and Spanish. She is employed as an employment counselor for Hennepin County.

The groom is 2010 graduate of Augsburg College with a bachelor’s degree in communications and marketing. He is employed as an account executive for AJ Indoor Advertising.

The reception and dance were held at Wedgewood Cove Golf Club.

After a honeymoon in Riviera Maya, Mexico, the couple resides in Wayzata.