What would happen in an emergency? 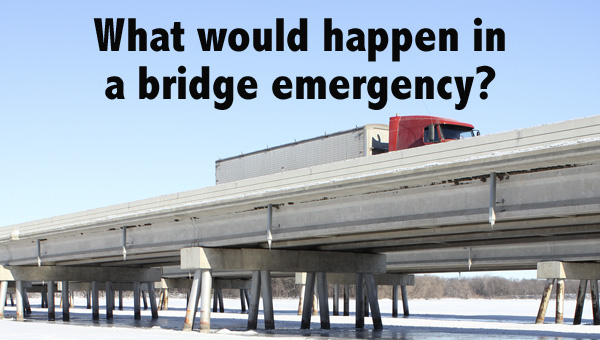 How would first responders handle a big emergency on the I-35 bridges?

Every day in Albert Lea, thousands of motorists pass over the two bridges on Interstate 35 above Albert Lea Lake.

With the bridge in existence for more than 40 years, most people don’t even blink an eye when they pass over the body of water.

But what would happen if there were some sort of a disaster on the bridge — if the bridge itself failed or if a vehicle somehow ended up going over the bridge into the lake below?

“It’s just a scary area to have to be in because there’s no place to get out of the way,” Albert Lea Township Fire Chief Chuck Karl said. “You’ve only got the platform of the bridge, and then it’s a long way down.”

Karl said in his time with the township fire department — at least 20 years — there has not been one person who has gone over the top of the bridge into the lake. However, he did recall at least one instance where a semitrailer went off the road near where the guardrail begins, all the way down to the water.

The cab of trailer landed in the water, while the trailer itself was above water.

The semi’s passenger flashed a camera on and off so people from the street could be alerted to them down below.

Karl also recalled a situation where there was a trailer carrying a lethal product on fire 18 or 19 years ago on one of the bridges.

Though it was a small fire, he said, officials were concerned because it was a lethal product,

and it could have potentially had a horrible effect.

“It is a concern,” Karl said. “There’s all kinds of hazards that go on that road.”

Already this winter, he noted, there’s been at least one rollover and a semi that jack-knifed on one of the bridges.

He advised safety, during winter weather especially, and to remember that these bridges sometimes gets slippery.

“The uniqueness of a bridge, and especially over water like that, it has a tendency to get icy,” he said.

He advised people to keep this in mind, to drive more attentively and maybe a little bit slower over that area.

How are the bridges constructed?

Minnesota Department of Transportation spokeswoman Kristine Hernandez said both the southbound and northbound I-35 bridges over Albert Lea Lake were built in 1970.

The bridges are made up of concrete decks supported by pre-stressed concrete beams over 14 spans. A span is the distance from one beam to the next.

The total length of each bridge is 1,275 feet long.

She noted that the bridges are not considered a “fracture-critical” design as the I-35W bridge in Minneapolis that collapsed in 2007; thus, there is not a high likelihood of the local bridge collapsing.

Ramon Riba, assistant district structures engineer for District 6 of MnDOT, said if something were to go wrong with one part of the bridges, other nearby parts of the bridges are designed to pick up an extra share of the load without collapsing.

This mechanism affords time to notice warning signs such as a sagging railing or a dip in the deck before total failure.

Riba said the bridge on I-35W over the Mississippi River did not have that design; thus, once a main part of the bridge failed, there was no other path its load could have taken, ultimately leading to the collapse.

What’s the response plan in case of an emergency?

Freeborn County Sheriff Bob Kindler said there is a generic emergency management plan in place for any crash or disaster that would likewise apply to a situation over this portion of I-35 as well.

The plan includes a contact list of available resources, personnel from various agencies that would be needed, utility companies, crane operators and tow operators, among others.

A team made up of responders from different agencies would respond.

Kindler said the Sheriff’s Office typically would play a support role with the Minnesota State Patrol and other agencies.

He said if someone went over the bridge into the lake, a response would be set up with not only law enforcement but also fire and rescue, involving equipment for dealing with water or ice.

There would be a staging area set up for medical treatment, and depending on the situation, officials also might have to set up a landing zone if a helicopter is needed.

Traffic would be detoured or maybe even temporarily suspended.

If something happened to the bridge itself, the Department of Natural Resources would also get involved to handle vehicles leaking fuels or other liquids.

If hazardous material is involved, even more agencies yet would be brought in, including Homeland Security, hazmat crews or emergency management officials.

“Everybody is specialized in their own fields; it’s just a matter of getting them involved,” Roche said.

Minnesota State Patrol Lt. Jeff Westrum said typically just one person with the statewide emergency management needs to be called, and that person sets the wheels in motion for the whole process.

The officials encouraged motorists to follow safe driving tips so the emergency plan never has to be implemented.

“It all gets down to driving conditions,” Roche said. “When you’re talking about something happening on the bridge, there’s still extra care that needs to be happening — especially at this time of year.”

Stats of the I-35 bridges over Albert Lea Lake 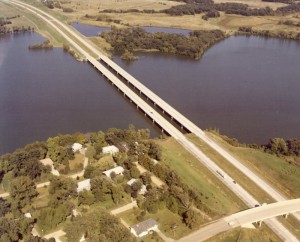 The Interstate 35 bridges across the narrow part of Albert Lea Lake southeast of the city was completed in December 1972. In the lower right hand corner of the photo is the South Shore Drive (County Road 19) overpass over the freeway. This aerial scene was taken in 1973 from the south side of the bridge by the late Ken Wangen, a local photographer. -- Photo courtesy Freeborn County Historical Museum

The bridges opened to traffic in 1972

It took about nine years for the Interstate 35 bridges over Albert Lea Lake to evolve from the planning stage through construction to completion.

In 1963 the decision was made for I-35 and I-90 to have an interchange or crossing at the present site northeast of Albert Lea. From this point I-35 would go south to Albert Lea Lake, across the narrowest part on a double bridge and on south to the Iowa state line.

However, from this point on south there was a problem. The Iowa highway planners had to deal with a serious controversy for a few years regarding the routing of the new freeway. Should the new road follow the general routes of U.S. Highways 65 or 69 to Des Moines, Iowa? Finally, the present routing of I-35 in Iowa became a real compromise between those two older highways.

In late 1970 east-west I-90 was completed from Petran to Minnesota Highway 13 northwest of Albert Lea. During the following fall, I-35 was completed from Clarks Grove to County Road 45 near the present truck stops east of the city. Finally, the bridge across Albert Lea Lake was completed and the last link of I-35 between Duluth to Iowa Highway 9 near Hanlontown was opened to traffic on Dec. 12, 1972.

Verizon to have iPhone Thursday