Funeral services for William R. Hendrickson, 87, of Albert Lea will be held at 2 p.m. Wednesday at St. Theodore’s Catholic Church. The Rev. Mike Ellis will officiate. Military honors will be accorded by local servicemen’s organizations. Interment will be at the Hillcrest Cemetery. Visitation will be from 5 to 7 p.m. Tuesday at Bayview/Freeborn Funeral Home and one hour prior to the service at the church. To sign the guest book, go to www.bayviewfuneral.com. 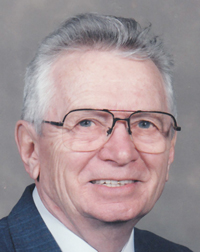 William was born on July 28, 1923, in Hamilton County, Iowa, to Gaylord and Helen (Rando) Hendrickson. He lived in Iowa with his family until 1934 when they moved to Albert Lea. Bill attended Ramsey and Albert Lea High School. On March 18, 1943, William enlisted in the U.S. Air Force at Fort Snelling. He served during World War II. On June 5, 1951, William was united in marriage to Rosemarie Arndt in Owatonna at the Sacred Heart Church. Bill worked at Wilson & Co. as a mechanic until his retirement. He enjoyed camping, working on cars and tinkering on projects. Bill was a member of St. Theodore’s Catholic Church, VFW and the American Legion. His grandchildren and great-grandchildren held a special place in his heart and he enjoyed going to all the events they were involved in.