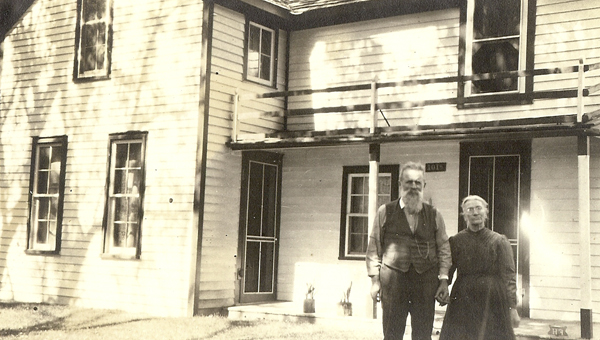 Soren and Martha Janson stand in front of their home at 1018 W. Front St. This photo was taken in 1913. The residence, then one of the oldest in Albert Lea, no longer exists. -- Photo courtesy Freeborn County Historical Museum

Albert Lea has 42 city parks ranging in size from large to obscurely small in its municipal system. And if a proposal made by a doctor in Chicago had been accepted by the city council 72 years ago, there could have been a 43rd park. 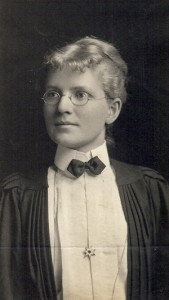 This photo of Dr. Sara Ann Janson was taken in 1904 when she graduated from Rush Medical College in Chicago.

“A letter was read by the City Manager stating that Dr. Sarah Janson who owns the old homestead of her late father — about 14 acres — located at the extreme end of West Front Street, has offered the property to the city, providing that the house and lot on the property be given over, tax free to the two adopted daughters living in Albert Lea.

“Dr. Janson suggests that the city take over the land for park purposes or children’s playground.

“After considerable discussing it was moved to place the letter on file to give the council time to look over the property and make a decision later. The same resolution states that if the land gift is a accepted by the council, and is a park, that said park be called the ‘Sarah Janson Park.’”

The are several details in this news item that need further explanation and clarification. First, the doctor’s first name was Sara. This is confirmed with several letterheads and other information in the archives of the Freeborn County Historical Museum Library. Second, the house mentioned was at 1018 W. Front St. Third, the two daughters were adopted by one of her sisters. Fourth, the property proposed for use as a city park was bordered on the south by Front Street, on the north by the railroad tracks, and somewhat on the east by South First avenue and on the west by South Fourth Avenue, according to a 1895 county plat book.

Now, just who was this doctor in Chicago who wanted to donate land for a city park in Albert Lea? 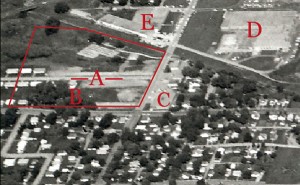 This aerial view of the neighborhood where an area was once proposed for use as a city park in 1939 was taken about 1964 when this part of Albert Lea was starting to expand. The area outlined in the upper left corner was the estimated site for the proposed park. Letter A is the present Janson Avenue. B was the location of the Janson home at 1018 W. Front St. C is the Tribune building, D is Streater, and E was then National Cooperatives, now ProfitPro. -- Photo courtesy Freeborn County Historical Museum

Sara Ann Janson was born in Albert Lea on Sept. 13, 1874, the daughter of Soren C. and Martha Janson. She was the fourth of five children — one boy and four girls. (Her brother died at the age of 3.) The parents were Danish immigrants and her father was employed in Albert Lea as a miller.

On June 12, 1891, she was one of six students to graduate from Albert Lea High School. As a formal part of the ceremonies, each graduate was required to give a commencement speech.

Just before her 17th birthday, she enrolled at Mankato Normal School and completed the basic teacher’s training course in one year, then taught in the Little Falls system. She also obtained a degree from the University of Minnesota. During her 10-year teaching career, she later became a principal at Brainerd and somehow found time to attend medical school in Chicago.

In 1902, Dr. Janson became the first woman to graduate from the University of Chicago with a degree in medicine. Her medical education was enhanced when she became one of the first women to obtain a degree from Rush Medical College in Chicago. Dr. Janson then practiced medicine in Chicago for more than 60 years. During her career the lady doctor delivered more than 7,000 babies.

Dr. Janson was a strong advocate of a college education for everyone. She was also an outspoken advocate of women’s rights. At that time women couldn’t legally vote. (The only exceptions were in a few western states such as Wyoming, Montana and Oregon.)

During the first two decades of this century women were demanding suffrage, or the right to vote. Dr. Janson was quoted as saying, “Suffrage is a woman’s birthright. Men have not provided properly for growing generations.”

The Chicago Record-Herald reported that on March 15, 1910, Dr. Sara Janson-Langville tried to register as a voter. The election judges tried to discourage her. However, the determined lady doctor insisted on being registered. The doctor said all she wanted to do was vote for the trustees of the state university system. Thus, the pioneering doctor became the only woman in Chicago to register and even cast a vote that day.

Her hobbies included archeology and geology. She also enjoyed hunting and fishing in the northern parts of Canada around Hudson Bay and in the Yukon. She and her husband, Allister Sloan Langville, enjoyed traveling. In addition to their summer trips to the north of the Arctic Circle, they traveled all over Europe. Her husband died in 1935.

On May 29, 1941, Dr. Sara Janson was the commencement speaker for the Albert Lea High School graduates. This event took place just 50 years after her own graduation from the local school. Incidentally, there were 210 students graduating that year.

Roger Lonning, retired educator and librarian at Albert Lea High School, summed up the doctor’s life with the comment that she was “a pioneer in more fields than one — education, medicine, women’s suffrage, rights and equality for women, and a pioneer in what she called ‘roughing it’ — fishing and hunting in the … far north.”

Where the proposed Janson Park was to be located is now the site of Kwik Trip, several apartment buildings and private residences. Also in this area is Janson Street which is named for this Danish-American family in general and Dr. Sara Ann Janson in particular.