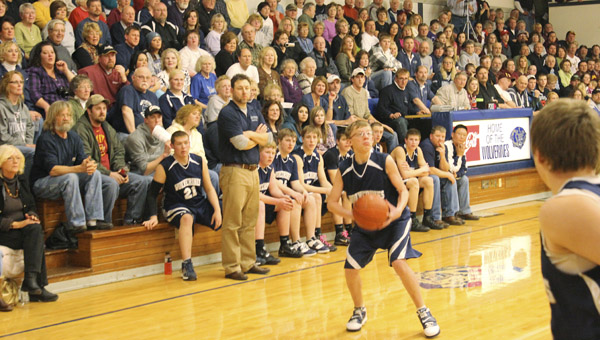 Glenville-Emmons senior guard Collin Johnson shoots while the hometown crowd holds its breath. The shot didn't go in, but the crowd went wild when, in the waning moments of the blowout, he got to play. -- Tim Engstrom/Albert Lea Tribune

GLENVILLE — Charged by a home-court crowd that was packed to the rafters, the Glenville-Emmons boys’ basketball team trounced Medford to advance in the sectional playoffs.

The Wolverines were 1 point shy of having twice as many points as the Tigers. The score: 85-43.

Glenville-Emmons is known for defense, but, with the excitement in the air, everything the boys tossed up was going in the bucket. Forward Andrew Lau had 35 points and guard Peter Hansen had 29. And they outrebounded the Tigers 43 to 22. The Tigers had 16 turnovers to the Wolverines’ 11. 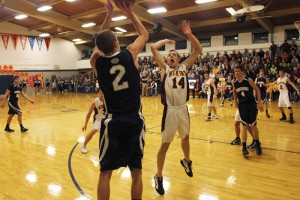 Medford's Daniel Peterson reaches to defend a jump shot by Glenville-Emmons guard Peter Hansen Thursday in the first half. With jam-packed gym, the Wolverines shot lights out. Hansen drained the 3-pointer to make it 29-19. -- Tim Engstrom/Albert Lea Tribune

Medford coach Brad Spinler said his team’s strategy was to get the ball inside, get fouls and get to the line.

“For the first 10 minutes of the game, we were accomplishing that,” he said.

The zone kept the pace down, but then the Wolverines started to pull away as they were able to increase the game’s pace and play their game.

“We want to get that game uptempo as much as possible,” said Glenville-Emmons coach Dan Fredrickson.

A key point in the first half — as the score started to become lopsided — came when Hansen nailed a 3-pointer to make it 40-19. He drew a foul on the shot and made the free throw to complete the four-point play. The halftime score was 45-22.

Last year, the Wolverines set a school record for least points allowed. Fredrickson said the team shoots for a fast-moving offense and an intense defense.

“Defensively is where we are hanging our hat,” he said.

Lau alone had 10 rebounds. Hall had 12 assists and four steals.

Sometimes, every Wolverine on the court touches the ball before a shot is taken. Other times, the guard will just pull up and shoot. Their offense seemed hard to predict to the Medford Tigers. Glenville-Emmons finished with 27 assists as a team.

The crowd cheered boisterously when Collin Johnson came into the game. Other players did their best to get him the ball, and he did got a shot off. However, fouls and a running clock wrapped up the game.

Glenville-Emmons advances in the west division of the Section 1A playoffs. They play Bethlehem Academy of Faribault at 8 p.m. Tuesday at the Mayo Civic Arena in Rochester. Bethlehem Academy defeated Randolph 51-50 on Thursday.

Click here to see a photo gallery from the game.