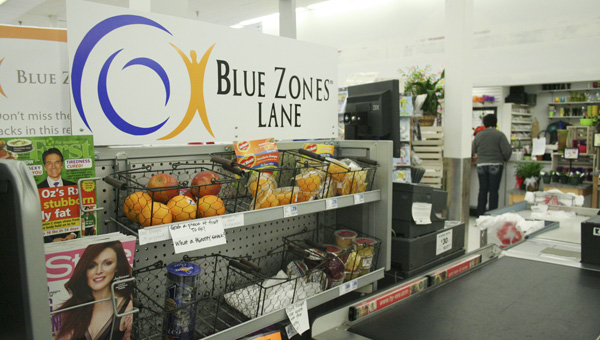 After two years in the making, Albert Lea Hy-Vee rolled out its Blue Zones checkout lane in January.

The Blue Zones Lane at Albert Lea Hy-Vee contains healthy snack, such as granola bars and dried fruit, rather than candy, which is sold through the other checkout lanes. -- Michelle Haacke/Albert Lea Tribune

While most checkout lanes are stocked full of candy bars, gum and sweet treats attractive to children and adults, the Blue Zones lane features a variety of healthy snacks, including granola bars, carrots, dried fruits, string cheese and flavored water.

Hy-Vee dietitian Amy Pleimling said since the Blue Zones lane opened, the store has seen an average of a 42 percent increase on sales of items featured in the lane.

She said some of the products, such as the individual sales of Fiber One granola bars or applesauce packets featured in the lane, were not sold individually before. Therefore, she has no data to compare those sales to.

While the lane is not always open — it’s not one of the “main” checkout lanes — Pleimling said the idea is that the advertising is still there.

“Parents send their kids to that lane for a snack, and then they’ll return to the lane they’re checking out in,” she said.

Monkey Bars are among the kid-friendly treats in the Blue Zones lane at Hy-Vee. -- Michelle Haacke/Albert Lea Tribune

Pleimling said Blue Zones founder Dan Buettner brought the idea of incorporating a healthy snack checkout lane to her as more of a sustainable approach to the Albert Lea Vitality Project initiatives.

The Vitality Project took place in 2009 as a community effort to bring health issues to the forefront of Albert Lea, whether in the home, workplaces or infrastructure.

The checkout lane took two years to implement because, though local Hy-Vee managers were quick to jump on board, she had to work with Blue Zones lawyers to use the logo.

Hy-Vee decided to use the closest checkout lane to the store’s entrance, which was already intact. However, many of the items they wanted to put in the lane required refrigeration. 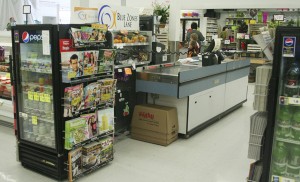 The Blue Zones Lane at Albert Lea Hy-Vee was not open early Sunday afternoon. Hy-Vee dietitian Amy Pleimling said even when it's not open, the public is invited to take healthy snacks from it to other checkout lanes. -- Michelle Haacke/Albert Lea Tribune

Pleimling also spent a lot of time working with Pepsi to gain partial use of a cooler owned by Pepsi, and getting them to agree to allow Hy-Vee to use space for products not sold by Pepsi. Hy-Vee gained use of half of the cooler to stock with carrots, dip, yogurt, string cheese, skim milk and 100 percent juices.

“It’s inevitable when time passes in any aspect of life, for people to forget,” she said. “It’s important for the leadership of the group to make sure the community knows it’s long-term.”

Initiatives have been happening quietly

A sign for the AARP/Blue Zones Vitality Project sits in the window of the Jacobson Apartments building on Broadway Avenue.... read more