Lois Virginia Peterson, 85, of Blooming Prairie, died Sunday, Feb. 27, 2011, at Good Samaritan Society in Albert Lea. She was born March 20, 1925, the youngest of 12 children, to Agusta and Annie (Hill) Aston at home in Harrisburg, Ark. Her mother died when she was a little girl. Lois grew up in Harrisburg where she attended country school. She married Irvin Peterson in 1944 in Michigan. They made their home in Blooming Prairie. Irvin passed away in 1962. Lois married Kermit Peterson in Blooming Prairie in 1969. He passed away in 1994. A member of First Lutheran Church in Blooming Prairie, Lois enjoyed being with her grandchildren, watching soap operas on television, crocheting, doing word find books and going fishing in the summer. She lived in Owatonna for three years and in Albert Lea for 11 years. 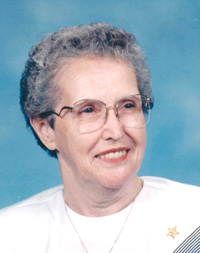 Funeral services will be held at 11 a.m. Thursday at First Lutheran Church in Blooming Prairie with the Rev. Charlie Leonard officiating. Visitation is from 4 to 7 p.m. Wednesday at Worlein Blooming Prairie Funeral Home and at the church one hour prior to the service. Interment is at First Lutheran Cemetery. You may send condolences to www.worlein.com.