A 34-year-old Kentucky man found on Interstate 35 in October with more than 200 pounds of marijuana pleaded guilty on Friday to drug possession as part of a plea agreement in his case. 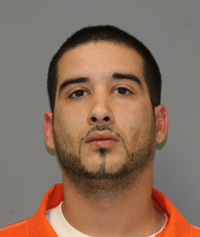 Shannon O. Gonzalez, of Radcliff, Ky., pleaded guilty to one felony count of fifth-degree drug possession, which is down from an initial charge of first-degree possession.

Gonzalez’s public defender, Kevin Riha, and Assistant Freeborn County Attorney David Walker are recommending Gonzalez serve no additional jail time but be sentenced to probation. If Gonzalez completes the terms of his probation, his felony charge can be reduced to a gross misdemeanor or even a misdemeanor.

Walker said he agreed with the recommendation after hearing testimony during an omnibus hearing for the case, which questioned the extended scope of the search of Gonzalez’s pickup by a Minnesota State Patrol trooper.

Gonzalez was initially pulled over on Oct. 19 on Interstate 35 near mile 5 by a trooper for nonrelated violations. However, the trooper eventually ended up searching the vehicle with a K9 officer, which alerted the trooper to the presence of drugs in the truck bed.

When the trooper opened the truck cover and tailgate, he reportedly found duct-taped boxes and a black hockey bag. The boxes had “bricks” of marijuana inside.

Walker said he was concerned the judge may not find the expansion of the scope of the search to be within constitutional limits and thus agreed to Riha’s plea proposal.

The agreement states Gonzalez can reject his plea if the judge does not adhere to it during sentencing or if the agreement is not accepted by Interstate Compact, the transfer system that would allow Gonzalez to transfer his probation to Kentucky.

Gonzalez said he has no desire to move to Minnesota and would like to serve his probation in Kentucky.