Funeral services for Matthew Charles Nesse, 27, of Albert Lea, will be held at 2 p.m. Thursday at First Lutheran Church. The Rev. John Holt will officiate. Interment will be at the East Freeborn Cemetery at a later date. Visitation will be from 4 to 7 p.m. Wednesday at Bayview/Freeborn Funeral Home and one hour prior to the service at the church. To sign the guest book, go to www.bayviewfuneral.com. 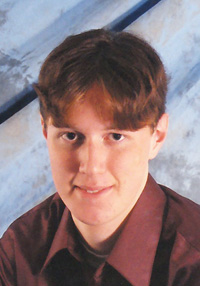 Matthew Charles Nesse was born on Dec. 23, 1983, in Albert Lea to Charles and Judith (Moore) Nesse. Mathew was brought to the Lord in Holy Baptism on Feb. 26, 1984, at First Lutheran Church. He was confirmed in the Christian Faith at First Lutheran Church on Oct. 10, 1999. Matthew graduated from Albert Lea High School in 2002 and attended South Central Technical College in Mankato where he studied visual arts. He lived in Albert Lea for a short time after school and then moved to Minneapolis where he was employed as an audiometer technician at Benson Medical Instruments. He had recently returned to Albert Lea. Matthew was a member of First Lutheran Church in Albert Lea. He loved drawing and painting and was a very talented artist. Matthew’s works were displayed in both high school and college and the Blue Earth County Library in Mankato has a permanent display of his art. He enjoyed many types of music, played guitar and especially like spending time with his friends and his companion, Evie, his pet dog. Blessed be his memory.

Matthew was preceded in death by his grandparents, Luverne and Genevieve Nesse and grandmother, Harriet Moore.

In lieu of flowers, memorials are preferred for a visual arts and graphic design scholarship through First Lutheran church.