Base of operations: Manchester Township 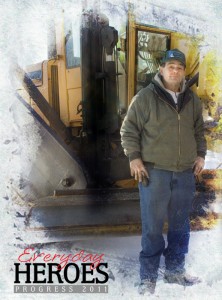 Manchester Township’s grader and snowplow operator Doug Jacobs has worked for 10 years to make sure the roads in this township are passable. -- Sarah Stultz/Albert Lea Tribune

Superpowers: staying out of the ditch

Origin: Ten years ago, a Manchester Township supervisor asked Jacobs if he wanted to become the township’s grader and snowplower.

And he’s been doing it ever since.

With 34 miles of roads in the township, he grades the gravel roads in the spring and summer and then clears them of snow in the winter.

Thanks to Jacobs, township residents are able to travel the roads safely.

He said during the winter, he goes by the state and county highway official’s rules as to when to go out and plow.

If visibility is bad, he doesn’t go out.

Usually, he said, he ventures out to clear the snow at 4 or 5 a.m.; other times, he waits until a storm passes and then goes out in the evening.

“It’s kind of like snowmobiling — it’s a rush,” Jacobs said.

He noted that while he tries not to go in the ditch, he has an agreement with Hartland Township to pull him out if it does happen. He offers the same service if the Hartland operator goes off the road.