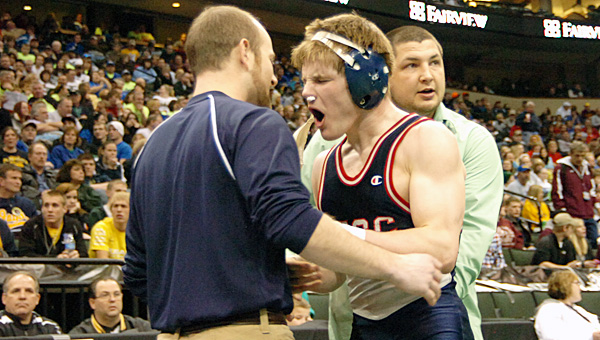 ST. PAUL — Dustin Dylla let out a loud roar Friday after advancing to the state semifinals with a convincing 7-2 win over Jordan Rothers, of Kerkhoven-Murdock-Sundburg.

Dylla was the only United South Central Rebels wrestler to advance to the final four and is one match away from wrestling for a state title.

Dylla edged Garret Hoffner, of Mahnomen/Waubun, 4-3 in the first round, narrowly earning a chance to wrestle Kuechle. He didn’t take that chance for granted as he quickly built 4-1 lead with two takedowns in the first period against Kuechle. The two wrestlers then traded one-point escapes before Dylla scored a third and match-sealing takedown in the third.

“I didn’t know I had the match until I got the final takedown and he kind of gave up,” Dylla said. “My blast-double worked on him perfectly.”

The Rebels’ Dylan Herman came within a point of joining Dylla in the semifinals, losing to New York Mills’ Shane Novak 1-0 in the quarterfinals. Novak’s escape in the second period ended up winning the match.

The Rebels 189-pounder Brady Thisius and heavyweight Tony Willette were both eliminated from the tournament after losing in the first round and having their opponents lose in the quarterfinals.