There will always be an honored place in Minnesota history for former Albert Lea resident Timothy J. Sheehan, the “Fighting Irishman” and the “Savior of Fort Ridgely” in 1862. 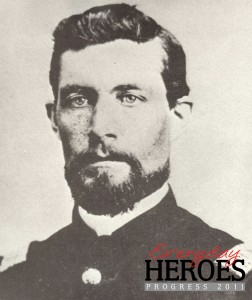 However, there are several interesting details about Sheehan’s life the historians may have missed. For example, he rose from the rank of private to lieutenant colonel within four years and fought in two wars. He commanded an Albert Lea infantry company that comprised a full third of the defenders at Fort Ridgely during two intense attacks by Mdewakanton Sioux warriors. And for 28 years Sheehan lived in Albert Lea and was elected to serve as the Freeborn County sheriff for 12 years.

Instead of going south to fight in the Civil War, Company C became a part of the garrison at Fort Ridgely, about 16 miles northwest of New Ulm.

During July and early August 1862, Lt. Sheehan and his troops were stationed at the Yellow Medicine Agency (near Granite Falls) to prevent problems with restless Indians.

Company C arrived back at Fort Ridgely on Aug. 12. A few days later the unit was ordered to march north to Fort Ripley.

After marching north for 42 miles, Company C received orders from Capt. John Marsh, post commander at Fort Ridgely, to return immediately because warfare had broken out with Chief Little Crow and his Sioux followers.

Meanwhile, Capt. Marsh and 46 soldiers left Fort Ridgely and marched west to put down the uprising. He and half of the troops were killed in an ambush at the Redwood Ferry (near Morton).

When Lt. Sheehan and Company C arrived at Fort Ridgely, they found the frontier post in complete chaos. About 500 civilians had fled to the fort to escape the rampaging Sioux. There was a shortage of water, ammunition and food, and the Indians were about to attack. And as the senior officer, Sheehan became the post commander.

Sheehan’s skillful leadership, plus help from an old artillery gun operated by a Sgt. John Jones, repulsed the first Sioux attack on Aug. 20, 1862. The 153 soldiers successfully fought off several thousand Sioux warriors. Most of the Indians then left the area and went off to attack New Ulm. After being repulsed at New Ulm, the Sioux returned to attack the fort again on Aug. 22.

Sheehan and his troops held the fort with a minimum of losses and were reinforced by civilian volunteers on Aug. 27 and Army troops the following day.

In late September, Sheehan was promoted to captain. About a month later, the veterans of Company C were sent south to participate in the Civil War. The unit took part in about 10 major battles in Tennessee and Mississippi, including Vicksburg and Nashville. Sometime during this period Sheehan became a major.

On Sept. 1, 1865, Sheehan was promoted to the rank of lieutenant colonel and for the rest of his life was referred to by the title of colonel.

Sheehan returned to Albert Lea and married Jennie Judge, also born in Ireland, in 1866. They lived on East Clark Street across from the present St. Theodore Catholic Church and had three sons.

The war hero served as a deputy U.S. marshal until he was elected as Freeborn County sheriff in 1872. He served in this office until 1884.

The Sheehan family left Albert Lea in late 1884. He then served as the government agent at the White Earth Indian Reservation in the northern part of the state for four years.

In 1888 the Sheehan family moved to St. Paul, and he again became a deputy U.S. marshal.

On Aug. 19, 1930, Jennie Sheehan was the honored guest at the site of Fort Ridgely when a bronze plaque was unveiled to commemorate her late husband’s leadership in 1862. She died in 1934.

Fort Ridgely became a state park in 1939 and has been partly restored. And today the former frontier post serves as a reminder of the time when a unit of local volunteer infantrymen led by the “Fighting Irishman” fought off two attacks during the Sioux Uprising of 1862.