Lori Rae Parkinson and Shannon Roger Christiansen were married on Sept. 5, 2010, under a toule-covered arch in an outdoor ceremony at Berwood Hill Inn overlooking the Root River Valley in Lanesboro. 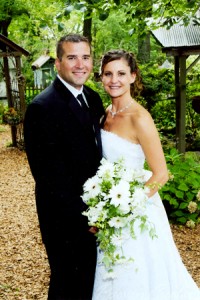 The afternoon double-ring ceremony was presided over by the Rev. James Rushton.

The bride is the daughter of Larry and Barb Parkinson of Davis, Ill. The groom is the son of Pat and Bill Searles of Albert Lea and Roger Christiansen and the late Fran Christiansen of Lake Mills, Iowa.

Champagne and hors d’oeuvres were served in the gardens after the ceremony, followed by dinner and a reception on the grounds of Berwood Hill Inn.

The bride graduated from Dakota High School in 1998 and University of Illinois in 2002 with a degree in health administration. She is employed as a program developer for the Southeastern Minnesota Area Agency on Aging. Her husband graduated in 1996 from Lake Mills High School and attended Hawkeye Community College in Waterloo, Iowa.

The couple reside in Kasson and will honeymoon in Alaska next summer.