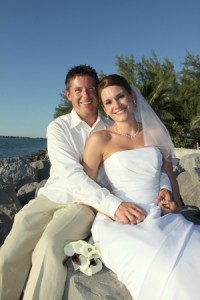 Parents of the bride are Charles and Lina Trost, of Glenville. Parents of the groom are Bruce and Pam Luehmann, of Cedar Falls, Iowa.

Grandparents of the bride are Ed and Elaine Shannon, of Albert Lea, and the late Leonard and Bernita Trost, of Glenville.

Grandparents of the groom are Elda and the late Edgar Luehmann, of Spring Park, and Bev and the late Marv Bjornsen, of New Rockford, N.D.

Maid of honor was Holly Erickson, of Albert Lea, friend of the bride.

Best man was Adam Luehmann, of Cedar Falls, Iowa, brother of the groom.

Personal attendants were Kelli Trost and Krista Trost, both of Glenville, both sisters of the bride, and Misty Struck, of Rochester, friend of the bride.

A reception was held at The Roof Top Cafe, Key West, Fla.

They are both employed at Brookside Golf & Country Club.

After a wedding trip to Acapulco, Mexico, in January, the couple resides in Columbus, Ohio.