Who will be the next commissioner?

Cutting their own wages.

That’s the first budget cut both Tony Pestorious and Mike Lee said they would make if they were forced to make a cut in the county’s budget. 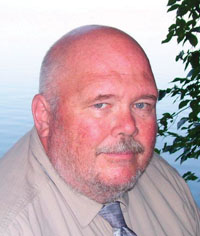 Although Pestorious is not an advocate for cutting employee wages, he said cutting wages of the Freeborn County Board of Commissioners would be a way for the board to lead by example.

Pestorious and Lee are the final two candidates in the March 15 general election for the Freeborn County 5th Commissioner District.

Both Pestorious and Lee ran for the seat in 2008. In that election, former Commissioner Linda Tuttle defeated Lee in the general election on a vote of 1,752 to 1,548.

Tuttle then vacated the seat on Aug. 1, 2010, when she resigned after being accused of using her company, Albert Lea Abstract Co., to divert money into her own accounts to pursue an alleged gambling addiction.

Before sounding off again in a live forum slated for Wednesday night, both candidates sat down with the Tribune and were asked the same set of questions in separate interviews.

In regard to salary issues, both candidates also weighed in on the salary debate between Freeborn County Sheriff Bob Kindler and the board.

Lee said he agreed with the commissioners approving the $75,000 salary for Kindler during his first year as sheriff.

“Sure, he’s got 23 years of experience being deputy, but how much as sheriff? They gave him a $13,000 bump from the minimum salary,” he said. “He seems to be doing a good job and I’m sure with experience, he’ll move up quickly.” 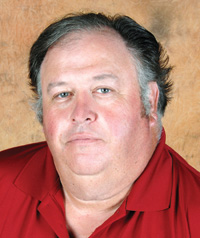 Pestorious said there could’ve been a little more give and take on both sides, and that Kindler and commissioners should’ve worked closer together to come up with a compromise. He also suggested that since a minimum salary was set, perhaps a maximum should’ve been posted for the first year.

In terms of cutting the county budget, Pestorious said he would also be interested in hiring freezes on certain county positions when people retire.

Lee said he would also look at things like going to a four-day work week at the Freeborn County Courthouse along with energy audits and possible privatization of some departments. Freezing overtime except for emergency-type services would also be an area he would explore.

Keeping taxes down and the budget lower are just a couple of reasons why these two longtime residents of Freeborn County are running for the position of county commissioner.

“We are living by decisions made 30 years ago, and we need to look at the long run of the county,” said Pestorious. “I don’t have all the answers and I’m not just working for District 5, but for the entire county. I am a conservative. With spending, I’m not going to vote for everything that comes along.”

Lee said he thinks his experience of working with local government would be beneficial for him in the seat. When the Farmland Foods packing house burned down, where he was employed, he lobbied to get an extension of unemployment benefits for those employees.

“I lobbied both sides of the aisle and learned a lot about how state government works,” he said. “From my experience with that, and since then, I got in touch with former District 27A Rep. Robin Brown and Sen. Dan Sparks often.” 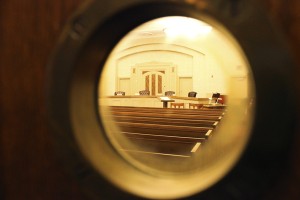 The commissioners’ seats can be viewed through one of two peepholes in the doors at the back of the former courtroom where the commissioners meet. -- Tim Engstrom/Albert Lea Tribune

When asked what the top issue is that the county is facing, Pestorious said there are a lot of issues and that the replacement of septic tank systems in rural homes still bothers him.

“I understand getting systems up to code, but if it’s working, leave it alone,” he said. “Let’s bring your septic tank up to code when you sell it.”

He also cited the property tax increases — a 33 percent increase since 2004 — as a big concern. He said the county needs to hold down spending and act as a watchdog on the ICE contract and the Bent Tree Wind Farm revenues.

Pestorious would also like to see each department try to reduce spending, as well.

“There’s got to be something out of a $40 million budget that we can reduce a little bit,” he said.

Pestorious is also an advocate for bringing jobs into Freeborn County and keeping young people here.

He said he thinks Freeborn County roads are safe, but the county needs to keep updating them. He said keeping signs and rumble strips at intersections — especially at blind intersections — is crucial. Keeping deer crossing signs along densely populated deer areas is also important.

When talking about the possible cuts to local government aid, Lee emphasized looking at different options: cutting the courthouse to a four-day work week, making sure energy efficiency is maximized, refinancing the courthouse for a lower rate, slashing overtime for non-emergency-types of services and looking at other departments.

“We just have to look at how to make everything run more efficiently, more smoothly,” he said.

Pestorious agreed there are a number of options to explore and suggested that in the short term, the county could possibly use ICE and Bent Tree Wind Farm revenues to “get us over the hump.”

Pestorious said he would support the idea of privatizing the Freeborn County Driver’s License Center if that could save money.

“I always either get my car license over the computer or go to Owatonna, which is privately run and open on Saturdays,” he said. “It seems a lot quicker and I think that’s the way to go.”

Lee agreed it’s an option to look at.

“Times are going to be tough,” he said. “We need to look outside the box to see what we can do to save costs.”

Lee also said another area to explore when keeping costs down might be cutting the offices of the Freeborn County Courthouse to a four-day work week. However, he would want to see more information first.

“Does it fiscally make sense or not? Do we make more money by privatizing it or keeping it? If they’re losing a ton of money, maybe we need to look at it. If it’s bringing money into the county, then maybe not,” Lee said.

Pestorious agreed that he would like to see more about what savings could be made there before making any decisions.

“I would look at every department and ask their employees what would work,” he said. “How it affects employees is one of the things overlooked a lot of times, and they’re the expert at it.”

There’s been discussion among some landowners along Pickerel Lake who want minimal vegetation visible while the Department of Natural Resources would like to see more vegetation. When asked their opinion on the matter of vegetation management in Pickerel Lake, Pestorious said he likes seeing the vegetation because it’s an indication that there’s no carp in the lake.

“The water quality has to be pretty good with duckweed,” Pestorious said. “I wouldn’t want it to look like a slew with bulrushes, but as far as duckweed, I think it’s a good thing.”

Cleaning up streams and lakes is something Lee is passionate about. He can see both sides of this issue.

“Living on the lake, you should be able to use it. Landowners have a right to cut the path of vegetation,” he said.

Lee is also a big advocate of replacing the Shell Rock River Dam.

When it comes to bicycle trails, both Pestorious and Lee support the expansion of bicycle trails across Freeborn County, as long as it doesn’t put the county in a financial bind.

Pestorious suggested going after lottery money and lobbying the state to get funding. Lee said he would advocate grant funding.

The election is March 15.

Mike Lee
• Age: 55
• Family: wife, Renee, four children and three grandchildren
• Occupation: health care with Elm Homes and Helping Hands of Minnesota
• Education: graduate of Glenville High School and of Riverland Community College
• How long has he lived in the area? Nearly all his life.

Tony Pestorious
• Age: 55
• Family: wife, Vicki, two daughters and four grandchildren
• Occupation: employee of the USDA food safety inspection service, meat and poultry division
• Education: graduate of Albert Lea High School in 1973, attended Texas A&M University and has participated in work-related continuing education
• How long has he lived in the area? He has lived in Freeborn County nearly all of his life. He has lived in rural Albert Lea for the past 13 years and is the fifth generation of his family to live in Pickerel Lake Township.