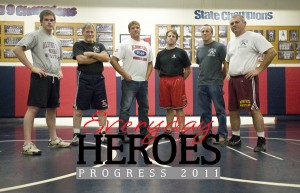 Base of operations: Albert Lea High School wrestling room
Superpowers: He teaches wrestling technique and organizes practices. Goodnature’s teams are always prepared for competition both mentally and physically. He assembles quality coaching staffs.
Kryptonite: He needs to work on delegating more day-to-day coaching responsibilities.
Affiliations: wife, Mary, and adult sons Brian, Jake and Nate
Origin: Larry Goodnature wrestled for the Albert Lea Tigers from 1967 to 1971. As a senior in high school, Goodnature was Minnesota state champion at 145 pounds when there was only one class. The Tigers team was the lone state champions that season and still holds the record for most points scored by a team at the state tournament.
Goodnature then went on to wrestle at Mankato State University from 1971 to 1976 and earned three NCAA All-American honors. In 1973, he finished fourth nationally at 158 pounds, in 1974 he finished sixth at 158 pounds and in 1976 he finished fifth at 158 pounds.
After graduating from MSU, Goodnature took a head coaching position at Hutchinson High School and coached there from 1976-79 before moving to Albert Lea.
Goodnature has been a head wrestling coach for 35 years and has won three Suburban West Conference titles and six Big Nine Conference titles. He has brought the Tigers to the state tournament five times, the finals twice and coached 44 individual state place winners.
Goodnature was Class AAA Minnesota Coach of the Year in 2006 and 2009 and has an overall coaching record of 368-136.

Secret identity: Albert Lea High School math and English teacher and assistant wrestling coach
Base of operations: Albert Lea High School wrestling room
Superpowers: He is a good technician who remembers things his colleagues forget. He is also good with computers.
Kryptonite: None
Affiliations: wife, Jean, sons, Alex, 40, and Nate 34 and daughters, Katherine, 36 and Rebecca, 31
Origin: Neal Skaar began wrestling for the Tigers as a sophomore at Albert Lea High School in 1962. He joined because his dad was a good “country wrestler” and a big fan of high school wrestling. Though he was unexperienced, it didn’t take Skaar long to become one of the best wrestlers in the state and later the nation.
Skaar made the Tigers varsity team as a junior and became a captain his senior year in 1964. During his senior season, he went undefeated until the regional tournament, where he lost just shy of a trip to state, but the team won its first Big Nine Conference championship.
Skaar went on to wrestle at Luther College for four years. He earned All-American honors during the final three years, placing fifth, sixth and third in the NCAA college national tournament. (At that time there were two divisions in NCAA sports — university and college, roughly corresponding with Divisions II and III today).
He majored in mathematics and English at Luther and went on to teach those subjects and coach at Albert Lea High School in1968.

Secret identity: biology and forensic science teacher and assistant wrestling coach
Base of operations: Albert Lea High School wrestling room
Superpowers: He has fathered six great wrestlers and is good with student athletes. He is known as a walking encyclopedia of wrestling.
Kryptonite: Organization and time management of practices and competitions can be difficult for him.
Affiliations: wife, Vicki, 47, sons, Josh, 25, Zach, 23, Beau, 22, Cody, 20, Cory, 17, Lucas, 15
Origin: Born in Glenville, Jon Hansen wrestled for Glenville High School from sixth grade through his senior year in 1979. Hansen then went on to wrestle at the University of Minnesota-Waseca for two years before graduating from South Dakota State University with a degree in agricultural education.
Hansen landed his first teaching and wrestling coaching job at Winthrop High School in 1984 where he taught until 1989. In 1990, Hansen moved to Albert Lea and was co-head wrestling coach with his brother Mike from 1990 to 1993.
By that time, Hansen’s sons began participating in the Albert Lea youth wrestling program so he stepped down from his position at Glenville and began helping with the youth program.
Within a month, Larry Goodnature asked Hansen to consider coaching with Neal Skaar at the junior level, which he did from 1993 to 2008. Since then, Hansen has been an assistant with the high school program.

Secret identity: Gas crew foreman with Alliant Energy and assistant wrestling coach
Base of operations: Albert Lea High School wrestling room
Superpowers: His energy, enthusiasm and competitive nature transfers to his wrestlers. He is very good at coaching the little things that help out each individual wrestler in different ways.
Kryptonite: None
Affiliations: wife, Dorenne, daughter Heidi Gaston (Sean), sons, Alex 23, Logan, 21
Origin: Mike Hansen was head coach at Glenville when that program merged with Albert Lea’s. When the two schools paired, he was asked to come along as an assistant coach. Hansen has been named the Section 1AAA Assistant Coach of the Year twice.