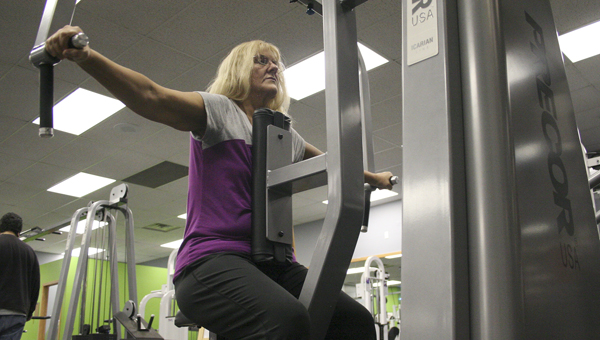 In an effort to visualize her weight-loss journey, one local woman collected a pound of food for every pound she lost. 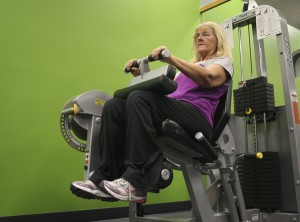 Shelley Gulbrandson works through her workout regimen at Anytime Fitness on Friday. She's been working out there for almost two years. -- Kelli Lageson/Albert Lea Tribune

Shelley Gulbrandson, of Glenville, was hoping to collect 100 pounds of food and donate it all at once to the Salvation Army food shelf, but her dining room was filling up and she ended up donating more than 80 pounds of food.

She hasn’t stopped trying to reach her goal and is just a few pounds away. It all started when she was having foot problems a few years ago, and she had been thinking about joining a gym for a while.

“I knew it would help me lose weight,” Gulbrandson said.

She joined Anytime Fitness in Albert Lea almost two years ago, and she’s been a member of Weight Watchers as well. She got the idea for donating food for each pound she loses at a Weight Watchers meeting.

“She’s such an inspiration,” Anytime Fitness Manager Sindy Dickey said. “She’s a testimony that it can be done.”

Now that she’s close to her goal weight Gulbrandson is worried about the new challenge of maintaining her weight.

Shelley Gulbrandson took this photo of more than 80 pounds of food that she donated to the Salvation Army food shelf. She had been collecting a pound of food for each pound of weight she lost to help her visualize her quest. -- Submitted photo

“The hardest part will be to keep it off,” Gulbrandson said.

In the past she’s lost weight and gained it back, but she feels that there’s something different this time. Exercising has become a big part of her life, and she likes mixing up her workouts.

“I love the elliptical,” Gulbrandson said. “I do the treadmill, the bike — just about anything.”

She said she likes the elliptical machine because it’s easy on her knees and feet, but still gets her to work hard. She also hired a trainer to teach her how to get more out of her workout and to utilize the different machines.

“I didn’t have a great deal of confidence that I was doing them right,” Gulbrandson said. 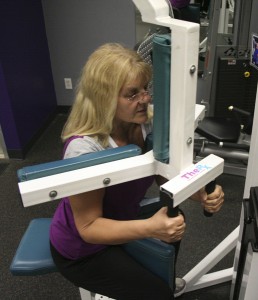 Shelley Gulbrandson gets a workout on Friday. She said she’s close to her goal of losing 100 pounds. -- Kelli Lageson/Albert Lea Tribune

Her trainer also showed her different ways to get a cardio workout and things she could do at home if she couldn’t make it to the gym. Now that she’s been introduced to weight training she won’t go back to doing strictly cardio workouts.

“It gives you more energy and just builds your stamina,” Gulbrandson said.

She plans to stick with Weight Watchers even after she reaches her goal because the meetings help her hold herself accountable. She also likes hearing ideas for recipes and listening to others’ stories.

Before she started her weight-loss journey she said she was afraid to try new things. She also was embarrassed to go shopping or even to go to church.

“I feel like I’ve lost a lot of time,” Gulbrandson said. “There’s a lot of things I’d like to do.”

She said now she likes shopping for clothes and has gained confidence in herself.

“I felt so self-conscious — now I feel like I can do anything,” Gulbrandson said.