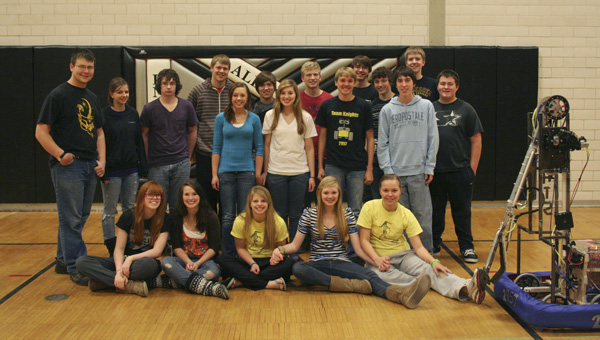 Most of the students on the Alden-Conger robotics team pose for a photo with their robot. The team had six weeks to make the robot before the competition. -- Kelli Lageson/Albert Lea Tribune

ALDEN — Students at Alden-Conger School on the robotics team did the best they’ve ever done in their their year attending the FIRST Robotics competition, which was held earlier this month.

The team, made up of 21 students, placed 13th out of 60 teams at the competition at the University of Minnesota’s Twin Cities campus. Tommy Geesman, a sophomore in his second year on the team and one of the team captains, said the team had six weeks to build the robot.

“This year we did really well,” Geesman said. 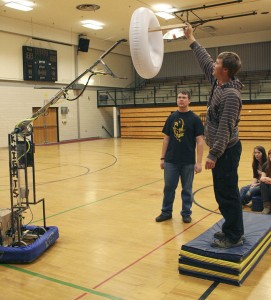 Another captain, Nathaniel Back, a senior, said the first two years the team went to the competition they finished in the middle of the pack, while this year they advanced to the top 25 percent.

“It was fun getting into the quarter finals,” Back said.

In previous years the robot built by the team was defensive, but Back said this year they wanted to play offensively.

Every team in the competition had to make a robot that can be driven by the students. It also had to be able to pick up inner tubes and place them on pegs at different heights.

Sam Hintz, an industrial technology teacher at Alden-Conger and team mentor, said the students learn the skills they need from engineering classes, and teams work together with ideas.

“We did really well and hope to do it again next year,” Hintz said.

“The competition is competitive but helpful,” Bosma said. “We got help from other teams up there.”

Bosma said the team would like to thank their sponsors including Albert Lea Medical Center and Medtronic. The community was also important in helping raise money for the team by attending a fundraiser dinner earlier this year.

This was the 20th year of the FIRST Robotics Competition. FIRST stands for For Inspiration and Recognition of Science and Technology and is a nonprofit organization. The goals of the competition are an emphasis on learning, helping others and inspiring students to consider careers in math, science, engineering and technology.