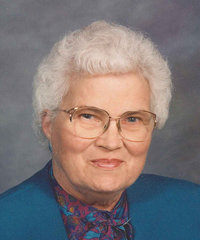 Funeral services will be held at 1:30 p.m. Friday at Salem Lutheran Church in Lake Mills with the Rev. David E. Jordon officiating. Burial will be in Salem Memorial Cemetery, Lake Mills. Visitation will be from 5 to 7 p.m. Thursday at Mittelstadt Funeral Home, 902 E. Main St. in Lake Mills, and will continue one hour prior to services at the church on Friday.

Marcelle Janet (Midlang) Anderson was born on Oct. 1, 1924, in Lake Mills, to parents John S. and Martha (Medlang) Midlang. She attended and graduated from Lake Mills High School where she had been the band queen during the Mason City Band Festival.

On July 11, 1942, Marcelle was united in marriage with Arden H. Anderson. The couple made their home east of Lake Mills where Arden farmed and Marcelle enjoyed being a homemaker and farm wife. She decorated cakes and took care of their family, learning how to garden, sew and quilt over the years.

Marcelle had worked at Monk’s Grill, owned and operated the motel in Lake Mills, and was an inspector at Fleetguard Industries for a number of years. She was definitely a rock in her family, both spiritually and emotionally for not only her children, but her grandchildren as well. Spiritually, Marcelle loved the Lord and was active at Salem Lutheran Church with circle, altar guild, and had been WELCA president. Emotionally, Marcelle was always there to support her children and grandchildren, not by judging them, but by offering encouragement and a shoulder to lean on when needed. She was also proud to be part of the American Legion Auxiliary, an RSVP volunteer at school, and loved bowling