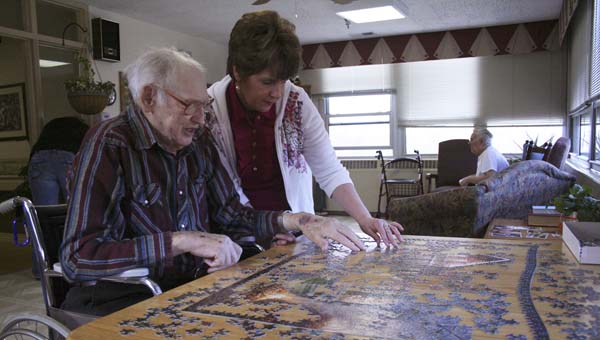 Art Richter works on a puzzle with St. John’s Lutheran Home Activities Director Diane Wichmann. Richter works on 1,000-piece puzzles and has completed many of them. -- Kelli Lageson/Albert Lea Tribune

Puzzles are no problem for one man who grew up fixing farm equipment, which are often just as complicated as puzzles.

Art Richter, 90, a resident at St. John’s Lutheran Home, spends some of his free time working on 1,000-piece puzzles. 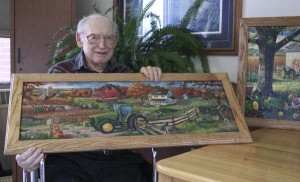 Art Richter shows a few of the puzzles he has completed and had framed. The one he is holding won grand champion at the Freeborn County Fair. -- Kelli Lageson/Albert Lea Tribune

“It’s something to do,” Richter said.

Richter grew up near Conger and farmed for his entire life. He was also quite a handy guy, fixing farm equipment for those who needed it and working on corn dryers for Sime’s Dryer Bins.

Richter has completed more than 25 puzzles, each with 1,000 pieces. He’s entered them in the Freeborn County Fair with the help of his son-in-law LaVerne Friedman, who frames them.

“He gets the staff involved,” Activities Director Diane Wichmann said. “He’s good at it.”

He likes to pass the puzzles along to his children and grandchildren. The puzzles often have farm scenes, and another common theme is the John Deere tractors.

“They remind me of the way I used to farm,” Richter said.

Richter said working on the puzzles has helped keep him sharp over the years. He doesn’t have a specific kind of puzzle he likes, but he does like ones with farmhouses and people farming.

As well as making puzzles, Richter works on woodwork projects. He’s made wagons, an arbor swing, cedar chests and shelves.