Teacher of the Year named

A teacher in her 30th year with Albert Lea Area Schools was named 2011 Albert Lea Teacher of the Year Wednesday. 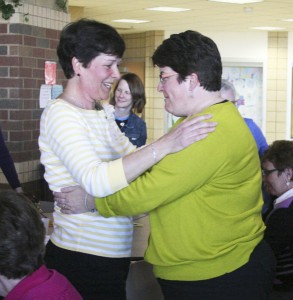 Peggy Bennett, who teaches first grade at Sibley Elementary School, was presented the award by Bill Leland, school board chairman.

“This is a gift,” Bennett said. “I’m happy to have the gift of being a teacher.”

Bennett thanked the crowd of more than 100 people at the banquet at Albert Lea High School and also thanked all the school support staff who help her do her job, like para professionals, food workers and office staff. Bennett said she was “dumbfounded” by the award and said there are many great teachers in Albert Lea.

“It’s an honor to be able to represent them,” Bennett said.

Sibley Principal Ross Williams said he was rooting for both the candidates from Sibley, and that Bennett is deserving of the award.

He said the school wouldn’t be doing some of the things it is currently with technology without Bennett, who is Sibley’s Building Technology Team chairwoman.

Bennett received her master’s degree from St. Cloud State University and has been a part of many committees with the school district. She’s been nominated for Teacher of the Year 11 times and a finalist seven times. She’s currently a member of the district technology committee and Sibley’s building technology coordinator.

Bennett’s mother, Francie Schulz, was there to see Bennett win the award and said she was happy for her. 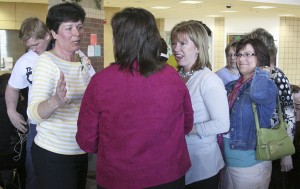 Bennett has been a weekly volunteer mentor and Bible study leader for local teenagers through Youth for Christ. She’s led mission trips and tutored children in the summer who have reading disabilities.

Bennett’s hobbies include photography, graphic design, music, dog training, reading and writing. She’s in the process of writing a historical fiction novel based on the lives of two family ancestors who lived during the Revolutionary War. She enjoys travel and has been to many countries including Israel, Greece, Mexico and Trinidad, among others.

Her two passions in teaching are technology and reading. She believes technology is a kind of language for young people and “to reach students we need to ‘speak their language’ fluently,” she wrote. She also loves to inspire reading in her students and hopes her students become lifelong readers.

Other Teacher of the Year finalists were Kiki Christensen, Ann Hareid, Linda Johnson, Kathie Lein and Jacque Sorensen. Each had the opportunity to introduce their families to the crowd before the award was given.