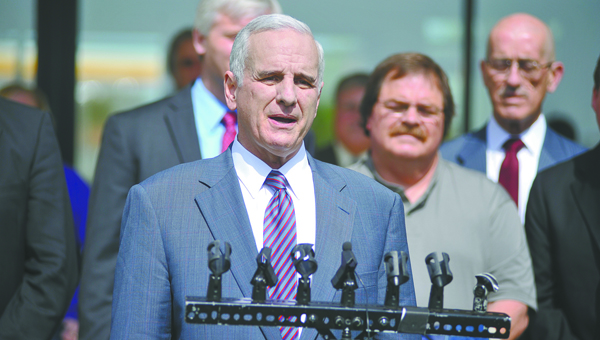 Gov. Mark Dayton talks Thursday morning at the Austin Airport about the lack of a budget deal and the possiblity of a government shutdown. -- Eric Johnson/Albert Lea Tribune

“We hope, since (Republican legislators) are not willing to compromise reasonably, the people of Minnesota make it clear they want a balanced approach,” Dayton said, standing outside the Austin Municipal Airport with area lawmakers. 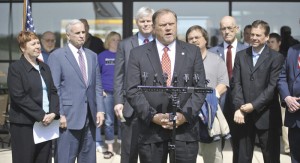 The media is addressed Thursday at the Austin Airport in regards to the lack of a deal being reached on the state budget and the possibility of a government shutdown. -- Eric Johnson/Albert Lea Tribune

Sen. Dan Sparks, DFL-Austin, stood behind the governor as he rallied Minnesotans. Sparks echoed Dayton’s words, saying the Republicans’ budget cuts would raise property taxes, cause massive cuts to Mayo Clinic Health System in Austin and Albert Lea and force up to a 14 percent budget slash at Riverland Community College.

“The governor and democrats were willing to compromise,” Sparks said.

Charles Mills, co-deputy chairman of the Mower County Republicans, thinks the conservative majority already has compromised by proposing a 6 percent increase in spending.

“The governor wants $8 billion (in increased spending), and the GOP gave $3 billion,” Mills said. “I haven’t seen much willingness in what (Dayton) has said about compromise.

“He’s still demanding increased taxes and Minnesota is already in the top tier.”

Dayton said he’s not sure what it will take to reach a compromise, but he hopes the GOP majority will agree to increasing revenue, particularly on the wealthiest 2 percent of Minnesotans.

As for a government shutdown, Dayton said that’s up to the Republicans.

Mayor Tom Stiehm said he’s not afraid of a government shutdown, but he is hoping for compromise sooner than later.

“We’ll survive one way or the other,” Stiehm said. “Nobody wants to see a government shutdown. Let’s see some compromise here; let’s see something get done.”