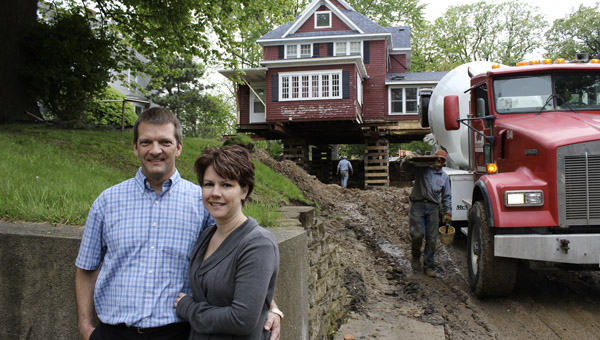 Home at 405 Vine Ave. is high above ground while it gets a new foundation

Motorists, pedestrians and bicyclists going up Vine Avenue after their trip along Fountain Lake this week noticed a spectacle that had them doing double takes.

The big, red house at 405 Vine has been up on stilts without a basement since Tuesday. More correctly stated, it was resting on I-beams supported by cribbing.

It is the home of Tim and Roberta Grahn. They bought it in 2003, believing the foundation was good. However, it merely had been covered by walls on the inside and by stucco on the outside. The decorative-block foundation for the 1895 structure was in terrible condition. 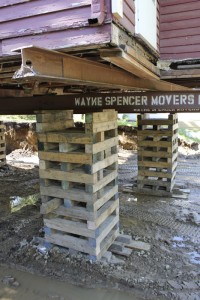 “The cement had broken down in the blocks and the blocks then were turning to sand,” Tim said in an interview Friday inside another Vine Avenue home.

Meanwhile, crews from City Concrete out of Austin were pouring the footings.

All week long, motorists have slowed to take a look at the house, which is about 12 or 13 feet above the dirt and mud and equipment. Pedestrians have stopped to marvel. People have been taking pictures, some even sending them to this newspaper.

Vine Avenue has a penchant for entertaining passers-by. On Monday, neighbors gathered to watch an excavator demolish 322 Vine. The house burned April 13 in an early morning fire. That resulted in an incredible rescue story of a neighbor family saving the couple who lived in the burning house.

And when home construction or destruction isn’t happening on Vine, the one-way street still seems like a parade of homes, with its array of home sizes, shapes and colors. There is nothing cookie-cutter about Vine Avenue houses.

“We are glad people are interested,” Tim said. “Vine Avenue is busy anyway. It keeps the speeders down.” 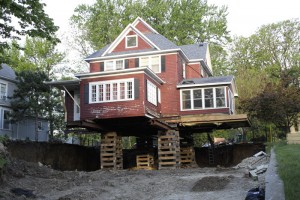 Tim said they first noticed the foundation problems in 2007. He took the gutters off to reroof the house and noticed an increase in water pouring into the basement. Upon closer inspection, he found holes in the stucco with no block behind.

“We couldn’t sell it with a bad foundation because I am honest, and it would not last with the present rate of decay,” Tim said.

They had been looking at siding and other home improvements, but realized everything came back to needing a new foundation. For instance, if they put siding on their home, it would only be crooked after the foundation was repaired. The work had to be done if they wanted to save the house.

Because of the shoddy foundation, the county assessor had dropped the approximately 2,400-square-foot house’s value to $120,000 two years ago. Tim estimated the cost of the foundation repairs at $100,000.

“We don’t really know the cost because it keeps rising,” he said.

In the meantime, Tim and Roberta have lived near Emmons at a house owned by friends Martin and Julie Bernau. Their five children are grown, but daughter Katie, 19, had returned from Minnesota State University Moorhead when work began on the house. She is staying with grandparents.

And their dog, a great Dane named Archimedes, is at the Emmons home.

Tim is the manager for the Almco plant on Main Street. Almco makes metal-finishing machines, such high-tech washers, dryers and conveyors for machine manufacturers. Roberta is a technician for the U.S. Department of Agriculture’s Albert Lea office of the Farm Service Agency. She owns the Dance Yourself Silly studio at Skyline Plaza and is known through Albert Lea for teaching ballroom dancing. 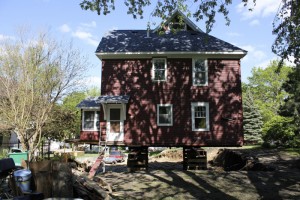 The view of the back of 405 Vine Ave. on Thursday shows a ladder leading to the back door, which is where the Grahns access the house, though they temporarily are living near Emmons. -- Tim Engstrom/Albert Lea Tribune

Roberta said she is completely in favor of the work being done, but she said she couldn’t bear to see the crews begin to tear down the foundation Tuesday and jack up the house.

“It’s a good thing I was at work when they were doing it. It made me sick to my stomach,” she said.

All their stuff is inside the house. Tim said they indeed go inside about once a day to get something. They use a ladder on the back side, where the ground is closer to the structure.

Tim watched the crews tear out the foundation. They would knock down parts of walls to set three crossbeams under the structure, then had blocks to support them while making another path through the basement for the two main beams. They placed jacks under the main beams to add the cribbing that supports the house. When they were finished tearing out the walls, they removed the jacks, leaving the cribbing.

The Grahns aren’t worried about a strong wind; there is too much weight pressing down.

Jacking a house off its foundation indeed causes stress on the walls of the house. Tim said there will be some small interior damage, and they will find cracks over time.

With all this work, they have to just love their house, right?

He said they like the house and the neighborhood and building a new home of similar size would have been even more expensive.

“It will be nice to have a viable living space when it’s all over,” Roberta said.

She said a dance studio for the basement is under consideration but there are many other decisions that must be made before that is even an option.

Tim said the first step will be to get the place liveable.

They have to insulate the basement, and depending on the costs of things, at some point, with cost as a factor, they will be able to make a decision on how the new basement will be used.

Here is what people rubbernecking on Vine can expect, tentatively:

Next week, City Concrete will pour the walls. Around the week of June 13 the house will be set onto the new walls. Then the floor will be poured. The sewer will be hooked up. The interior walls will be built. Then, probably near the end of summer, they can move back into their house.

That’s when the work to repair the front yard and driveway will begin. Those had to be ripped out to make room for the heavy equipment.

And they will be cleaning for weeks.

The work all started by him getting on the roof and knocking the chimney down into itself, then continuing from the inside. That work sent chimney soot into the house, so there will be much scrubbing to do. They also had to gut the basement, which Tim said had an awkward layout.

The new basement walls will be poured concrete, rather than blocks of concrete. City Concrete is just one of many contractors.

Wayne Spencer Heavy Movers, of Blue Earth, lifted the house. Lowell Heiderscheidt Tile Yard, of Sleepy Eye, demolished the old foundation. Wangen Excavating, of Albert Lea, hauled away the dirt and ruble. Mark Ringoen, of Glenville, will do the floors. Jim & Dude’s, of Albert Lea, is handling plumbing. Andy Houg Construction, of Albert Lea, is doing interior and exterior work, such as putting the windows back in. Other contractors, like the electrician, haven’t been selected.

The work at 405 Vine Ave. surely is the area’s home improvement project with the most public interest since the 2008 “Extreme Makeover: Home Edition” home of Dirk and Susan DeVries in rural Hayward Township.

Tim said people come up to him and say, “Do you have that house on Vine?” He says yes.

Roberta laughed and then said, “And then the next response is: ‘Wow!’”