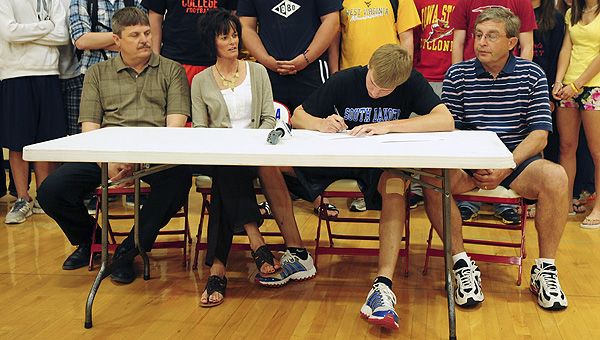 Albert Lea baseball player Aaron Klatt called it a “weight off his shoulders” Thursday when he signed a national letter of intent to play for South Dakota State University.

Klatt signed the letter in front of a group of classmates inside the Albert Lea High School gym alongside his parents Dave and Shari, and his coach Joe Sczublewski.

Klatt said he made his decision once he visited SDSU a second time and was able to watch a game and meet players.

“It was a great atmosphere,” he said. “They had fun playing the game that I love and I knew it was the right fit. On top of that the campus is gorgeous.”

SDSU is the largest university in South Dakota with 12,816 students and is located in Brookings, S.D. Its athletic programs wear yellow and blue and are nicknamed the Jackrabbits.

Klatt said he was impressed with the team’s pitching coach, Tyler Oakes, and that he hopes to pitch next season as a freshman.

“They do some bunting down there which shows when they’re down one run they can still come back and win because they have those tools,” Klatt said. “They have a good core group of guys and I’m hoping to go down there and win a conference championship.”

Klatt said he needs to gain weight, lift weights and work on mechanics during the offseason before making the leap to Division I college baseball.

“I’m going in there with confidence and know I can compete,” he said.