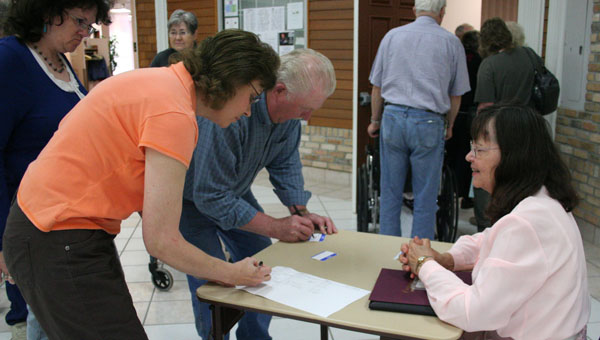 People sign up outside the Parkinson’s Support Group’s monthly meeting Tuesday. There were speakers from Struthers Parkinson’s Center, and about 70 people attended. -- Kelli Lageson/Albert Lea Tribune

Raising awareness for Parkinson’s disease and tips for sufferers and caregivers alike was the focus of a presentation Tuesday by two people from Struthers Parkinson’s Center in Minneapolis.

About 70 people showed up to attend the local Parkinson’s support group’s monthly meeting. They heard from Rose Wichmann, manager at Struthers Parkinson’s Center, and Joan Gardner, a clinic supervisor. 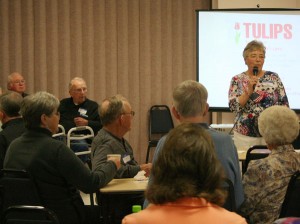 Maureen Ruble, a co-facilitator of Tuesday’s event, spoke to the crowd about the two women from Struthers Parkinson’s Center who spoke to a group of about 70 people. -- Kelli Lageson/Albert Lea Tribune

Wichmann said she hoped to raise awareness in the community about Parkinson’s and what kinds of treatments are available. She said she also planned to meet with health professionals from the area later on Tuesday to discuss Parkinson’s as well.

“No two people are alike — it doesn’t manifest itself the same,” Wichmann said.

She said Struthers Parkinson’s Center is a clinic dedicated to research and education about Parkinson’s.

Struthers Parkinson’s Center is a National Parkinson Foundation Center of Excellence that’s known for its comprehensive approach to managing Parkinson’s and other movement disorders.

“We have monthly events, but we don’t always have speakers,” Ruble said.

Ruble said sometimes they like to have no activities planned so people can talk with each other, but having speakers allows sufferers and caregivers alike to learn more about the disease.

Parkinson’s affects mostly older people and is a chronic, progressive disease. It’s a brain disorder that affects every person differently. Common symptoms include tremors, and difficulty walking or speaking loudly, among others. 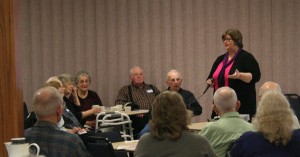 There is no known cure for Parkinson’s. Medicines can help with some of the symptoms, and doctors recommend exercise to keep muscles loose. Ruble said talking with others who experience the same symptoms and hearing from speakers can give sufferers the encouragement they need. The speakers also focused on caregivers, often spouses of Parkinson’s sufferers, who need to remember to care for themselves as well.

“It’s always good to get together and share,” Troska said.

One Parkinson’s support group member said she enjoyed the program and thought it was helpful.

She said that some longtime sufferers and the newly diagnosed were able to learn from the presentation. She also liked that the speakers encouraged those in attendance to sign up for Struthers’ newsletter to keep up with information.

Support group members were impressed with the attendance. Since the support group started late last winter only about 20 to 25 people have come to the monthly meetings. With about 70 people at Tuesday’s meeting it was more than double their usual attendance.

“It’s been growing,” Ruble said. “People are so ready to talk and share with people who understand.”

Ruble said people often come from Mower County as well as all over Freeborn County. Ruble said the support group would like to see more members. She can be reached at 507-373-1808 and Troska can be reached at 507-874-3367. The group meets every fourth Tuesday at 9:30 a.m. at the Senior Center in Albert Lea. They’ve also recently starting a lending library for books and materials about Parkinson’s.