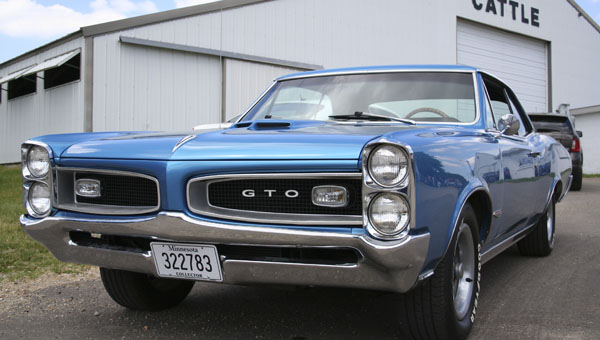 Paul Woodhouse is the most recent member of the club to pass away. His 1966 Pontiac GTO sat at the show shimmering in the light blue paint job with a chrome finish. -- Garrett Wampler/Albert Lea Tribune

For Ed Anderson and the Low Bucks Car Club, the final car show for Eddie Cochran Weekend has been 25 years in the making

“After 25 years of hard work we have the memories left,” Anderson said. “They’re pretty good.” 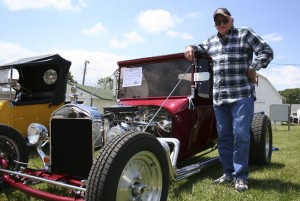 Winona resident Dave Lunde brought his custom hot-rod out to the show. The 1923 Ford T-Bucket yeilds a Ford V8 motor with an automatic transmission.

The Low Bucks Car Club earlier this year declared this would be the last year the club would organize Eddie Cochran Weekend. Club officers have said they would be glad if another organization picked up the duties, but after 25 years of doing it, they are weary of the task.

More than 200 cars were in attendance for this year’s show at the Freeborn County Fairgrounds. The attendance is up after showers at last year’s show brought only 65 cars to the event.

Low Bucks Car Club recognized 40 different classes that cars could be categorized into beginning with 1900-1954 stocks to 1978-present street machines.

Special trophies were given out based on participant judging for classes such as the Best of Show, Best Chevy, Best Ford and Best of Restoration.

Beyond the judging and competition there is something different about this year’s event.

This year’s car show holds a special meaning to the 25 active members of the club.

“This weekend is dedicated to the past members that have went on,” Anderson said while fighting back the tears in his eyes. “Without those guys, it’s getting harder and harder to keep the flame going.” 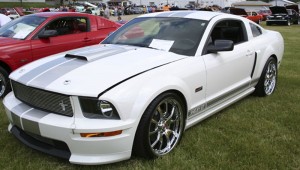 For the past 12 years Ryan Hintz, of Albert Lea, has been coming to the show. This year Hintz has his 2007 4.6 Liter Mustang Shelby with him.

Paul Woodhouse is the most recent member of the club to die. His 1967 Pontiac GTO sat at the show shimmering in the light blue paint job with a chrome finish.

Many of the other car owners had their own reasons for attending the final year of the show.

For some, it was just another show to take their cars to. For others, it has been an event that they have attended for multiple years and it has become the norm for them every June.

Rob Kauffmann, of Ostrander, brought his 1929 Ford Model A Roadster pickup truck to the show. The Roadster features a four-cylinder engine.

“We were looking for a truck, and we built one,” Kauffmann said. “We took pieces from here and pieces from there.”

Unlike many show goers, Kauffmann usually drives his truck to any car shows that he attends. 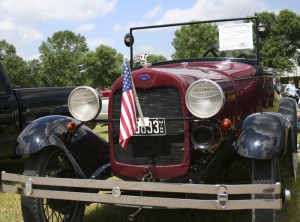 Rob Kauffmann, of Ostrander, brought his 1929 Ford Model A Roadster pickup truck to the show. The Roadster features a four-cylinder engine.

“Today I put 55 miles on it to drive it here,” Kauffmann said.

Winona resident Dave Lunde brought his custom hot rod out to the show. The 1923 Ford T-Bucket yields a Ford V8 motor with an automatic transmission.

For the past 12 years Ryan Hintz of Albert Lea has been coming to the show. This year Hintz brought his 2007 4.6 Liter Mustang Shelby.

Hintz is just one of the many show-goers who hope someone will take over Eddie Cochran Weekend.

“I’m hoping some of the other car clubs will take it over, I don’t know if that will happen or not but it would be nice if they did,” Hintz said.

Funding hasn’t been the issue for the car club as they still plan to issue a scholarship, as long as there is the appropriate money available.

Anderson said that the club hopes someone will take it over and “keep it rolling” but it wouldn’t be Low Bucks.

“It is a spendy proposition. Unless there is a group of backers I don’t think they will be able to put it on,” Anderson added.

“The club won’t be disbanding or anything like that,” Anderson said. “We’re not quitting, we said 25 years ago that if we hit 25 years let’s call it quits…well this is our 25th year and we’re going to call it quits.”

Low Bucks Car Club is still planning on having their monthly meetings.

As with many of the participants, saying good-bye to a staple of the Albert Lea community won’t be easy.

“I’m definitely going to miss it…you don’t forget the people that you’ve met,” Anderson said. “It’s hard to say that I’m glad it’s done but in a way I am-it’s a bittersweet-type deal.”