A step back, then forward 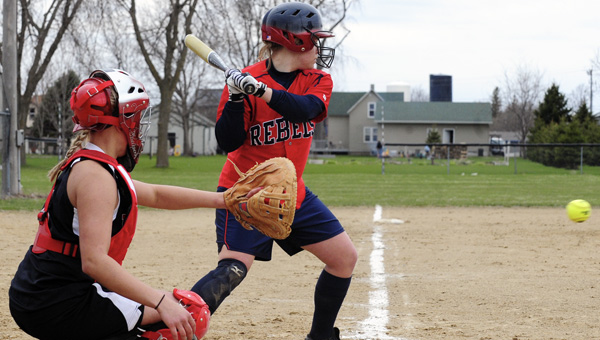 WELLS — When a rule changed moved the pitching mound back three feet at the beginning of the season, Ali Ramsley admits it was a challenge.

“I couldn’t pitch down the middle anymore,” the United South Central Rebels softball pitcher said. “I definitely learned that placement is key.”

Ramsley took the lesson and turned it into a phenomenal season, pitching all but five innings for the Rebels and leading them to a second-place finish in the Gopher Conference.

Ramsley said on her first pitch she always threw for a strike.

“Then I just mainly pitched balls that weren’t quite hittable but would get the girls swinging anyway,” she said.

And it worked. Ramsley struck out 123 batters on the season and walked just 28.

“I wasn’t necessarily throwing strikes the whole time,” Ramsley added. “But would get them swinging at balls that looked like strikes.”

Ramsley began playing varsity midway through her freshman year of high school. While she had been pitching since third grade, Ramsley was called up for her bat not her arm. She was the team’s designated hitter for the rest of the season and became the closing pitcher during her sophomore year. It was during her junior season she became the Rebels’ full-time starter.

While Ramsley batted .426 this season with 19 RBIs, she considers herself a better pitcher than hitter.

“I have more control over my pitching than I do in the batting game,” Ramsley said. “I may have one bad game pitching but I’ve gotten into batting slumps for three or four games without a hit.”

Ramsley credits much of the success she had this season to her catcher, Tayla Sunde, who’s sat behind the plate ever since she made the jump to varsity.

“She’s driven to always do her best,” Ramsley said, of Sunde. “If there was a foul ball her helmet would come off so fast it was ridiculous. You wouldn’t even think she was wearing one. I love Tayla, and she’s always pushed me to be a better player.”

Ramsley said before the season began, she expected the Rebels to contend for a Section 2A championship.

“We had a very good chance of going far,” she said. “I had expectations of going to state — that’s how much I believed in our team.”

The Rebels put together a strong regular season, finishing 13-5 and winning eight of their last 10 games. As Section 2A’s No. 2 seed, the Rebels won their postseason opener 9-4 over Janesville-Waldorf-Pemberton, but were eliminated in the next game by Mankato Loyola.

“It came down to not having timely hits,” Ramsley said, of the season-ending loss. “We got hits and probably had enough baserunners to win the game.”

Despite the loss, Ramsley said this season was one to remember.

“I won’t forget about it anytime soon,” she said. “I wish we would have gotten further, I think we could have easily made it to state but it was an awesome year.”

Ramsley is planning on attending Augustana College in Sioux Falls, S.D., next season. She is not going to play softball but is planning on playing intramural sports.