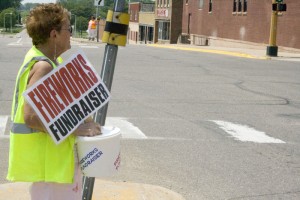 Jan Doyle stands in the middle of opposite lanes of traffic on Main Street while collecting funds for the annual Albert Lea Fourth of July fireworks display. Doyle said she has helped fundraise in previous year as well and enjoys volunteering to help out the community. -- Sarah Stultz/Albert Lea Tribune

Fireworks will again light up the sky this Fourth of July, thanks to donations from area residents totaling more than $16,000.

During what was the annual fireworks fundraiser organized by the Albert Lea-Freeborn County Chamber of Commerce and KATE/KCPI Radio, volunteers and staff with the organizations collected $16,243 at the intersection of Broadway Avenue and Main Street. 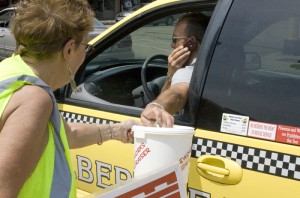 Jan Doyle collects donations Friday from an Albert Lea Taxi driver at the intersection of Main Street and Broadway Avenue. Donations will go toward the annual fireworks fundraiser put on by the Albert Lea-Freeborn County Chamber of Commerce and KATE Radio.

The day got off to a quick start with donations from companies like Minnesota Corrugated Box who gave large corporate donations.

Other companies made notable donations, including $500 from Mrs. Gerry’s Kitchen and Albert Lea Select Foods, among others who gave $250 donations.

Add that together, with some individual donations as well, and by noon more than $12,500 had been collected, Kehr said.

Chamber Operations Manager Tami Jensen said despite hot temperatures, the event made for an enjoyable day.

“We always have a good day — to get out and see everyone,” Jensen said.

She noted that Albert Lea’s fireworks display — fired from City Beach — is done without any city funds. People gather around the shore of Fountain Lake and even in boats on the water to watch the fireworks.

At a time when a lot of cities are having to cut this type of event because they can’t pay for it, Jensen said she’s relieved Albert Lea’s fireworks display is made possible solely through community donations.

“It’s great we don’t have to think about cutting this,” Jensen said. 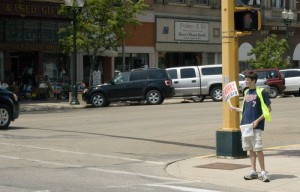 A volunteer collects donations Friday afternoon in front of Brick Furniture during the annual fireworks fundraiser put on by the Albert Lea-Freeborn County Chamber of Commerce and KATE Radio.

The fireworks fundraiser has been a part of Albert Lea history for at least 30 years. At one point it was conducted over a span of a few days instead of just a couple hours.