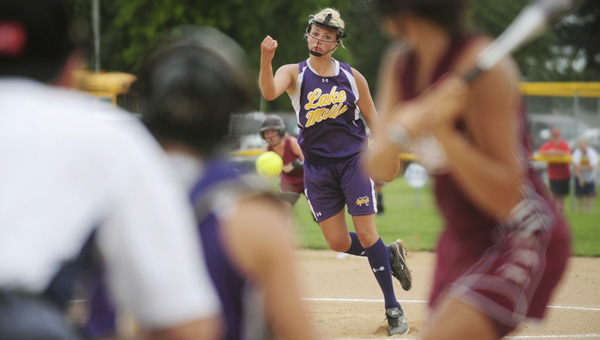 The Knights scored 10 runs on 15 hits in the game. They jumped all over Brackey from the beginning, tallying four runs in the top of the first behind three RBI singles from Jessica Balek, Jena Stallsmith and Grace Moore. Lake Mills (17-14, 9-3) also allowed one run to cross home plate on an error, when catcher Kelcey Srp mishandled an oncoming throw.

“When your up against good hitting teams that are prepared to face a good pitcher, it happens,” first-year head coach Sabrina Roll said about the loss.

Brackey was able to help her own cause in the bottom of the first inning when she knocked home a run on a double down the left-field line. The Bulldogs would be held scoreless the rest of the inning.

With the bases loaded and two outs in the top of the third inning, the Knights connected on three straight hits scoring five runs. Sam Grant, Paige Halsted and Balek all hit singles. Grant knocked in a run, while Halsted and Balek each registered two.

The Bulldogs wouldn’t go away easily as they attempted to fight their way back into the game during the bottom of the frame. With the bases loaded, Srp and right fielder Sarah Orban knocked in a run a piece as Lake Mills attempted to claw back into the ball game.

“When we get down it is a struggle,” Roll said.

It wouldn’t be enough as Newman Catholic scored their final run of the game during the top half of the fifth inning. Brackey added another run for the Bulldogs during the bottom of the seventh, but it was already too late for a comeback.

Lake Mills was aggressive on the bags during the outing. The Bulldogs recorded four stolen bases on five attempts. Carlie Christianson took two bases, while left fielder Randi Dilly and first baseman Lindy Pins were each credited with one steal a piece.

“From here on out our goal is to have a positive attitude when we get down,” Roll said. “When your a part of a winning program it’s tough but losses happen. Switching our attitude around this season has been something to get the passion back into Lake Mills softball.”