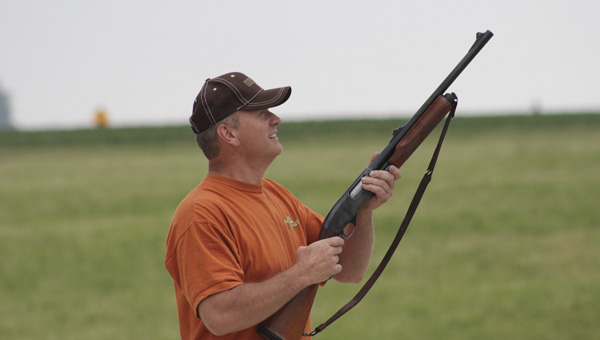 A shooter determines where he will make his first shot on the fowl at the Great Dane Shoot. -- Garrett Wampler/Albert Lea Tribune

ALDEN — Organizers of the 21st annual Morin Lake Days decided to give Fugleskudning another go around.

Fugleskudning, the Danish name for the Great Dane Shoot, is a competition that dates back to the 1800s. It was a part of the first 19 Morin Lake Days events before taking a one-year hiatus for a lack of participation.

“The year before we weren’t able to fill out our 100-person roster. We thought it would be better to take a year off,” event official Jon Duncan said. “Maybe it would help get more shooters interested again.”

Shooters attempted to remove different pieces of a hand-crafted fowl from the top of a telephone pole located 80 feet away from the shooting box and 40 feet off of the ground.

Event organizers limited the competition to 12-gauge shotguns with no scopes. Ammunition was supplied through a donation by Federal Ammunition.

The Great Dane Shoot brought out 71 shooters to the event. Each tried to earn the contest’s grand prize in six rounds. The grand prize was earned by knocking down the coveted breast plate.

“A majority of the people that shoot come back each year,” Duncan said. “It is kind of a fellowship.”

A $300 gift card to Hart Weaponry, donated by the Son’s of the American Legion, was awarded to Robert Johnson, of South Dakota, for removing the breast plate at 1:31 p.m. It took 275 shots for the plate to be removed.

Other cash rewards were given to the shooters that knocked down the head, west wing, east wing, and the tail.

The bird was composed of green ash wood. Its other features were made of metal making it difficult for the participants to remove.

“The objects are screwed in with leg screws, the parts are welded on to the legs,” Duncan said. “The breast plate was held on by five or six screws. They kind of have to chip away at them to pop them loose.”

Through the first two rounds of the competition the bird was victorious in hanging on to its appendages.

Matt Minear, of Walters, was the first shooter to make the bird surrender a limb. Minear decapitated the wooden fowl at 12:39 p.m., earning himself a $50 cash prize.

Members of the community who didn’t want to shoot could purchase a slot and designate someone else to shoot for them. However the shooters had to be either 18 years old or they must have passed a safety course.

The east wing was removed for Larry Lillidridge by Johnson, who was his designated shooter, at 1:11 p.m.

The west wing was shot off for Cliff Frantum by his designated shooter Travis Jacobson at 1:44 p.m.

Finally the tail was eliminated for John Duncan by his designated shooter Dan Classon at 1:57 p.m., 329 shots after the event began.

What began as just a yearly celebration has become a spectacle every year at the Morin Lake Days in the Freeborn County Co-op Oil parking lot, just south of Alden.

“The people in the town and participants in the past kind of missed it,” Bob Mathiason, organizer of the event, said. “We revived it one more time to see if we can get it going.”

Although the 71 shooters is still a low turnout for the event, Mathiason hopes they can have it again next year.

“We’d love to see that,” Mathiason said. “It’s one of the events of Morin Lake Days — we want it to be successful.”