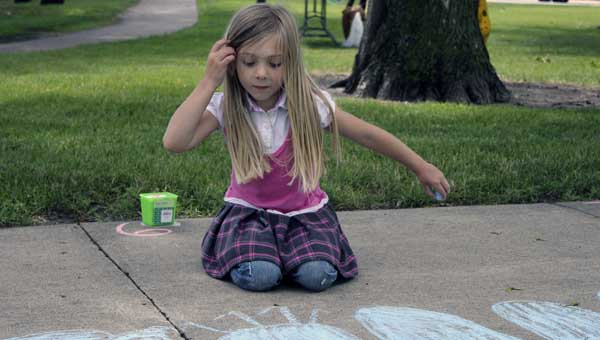 Makayla Baas, 5, creates her sidewalk chalk mural that was judged by the Albert Lea Fire Department at Kids Art in the Park on Wednesday evening at New Denmark Park. -- Garrett Wampler/Albert Lea Tribune

Local kids gathered in New Denmark Park, next to Fountain Lake, on Wednesday evening to partake in the first event of the summer put on by Albert Lea Parks and Recreation Department.

Wednesday evening marked the third annual Kids Art in the Park. The event was hosted lakeside and offered community members the opportunity to participate in many different activities from art to a ventriloquist show. 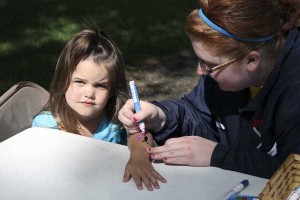 In previous years the event was held in Central Park. They moved it this year for greater visibility that hopefully helped with the turnout.

“The first year we had it we had quite a few people, we were impressed,” Jenny Davis, program coordinator, said. “Last year the weather was kind of iffy so we didn’t get nearly as many as we thought we would.”

The fun and artwork was geared toward elementary school students, but Davis said adults were welcomed too.

“We’re just trying to think of different events and I think years ago they had an art in the park that went to the wayside,” Davis added. “I thought it would be a neat idea geared more toward kids.” 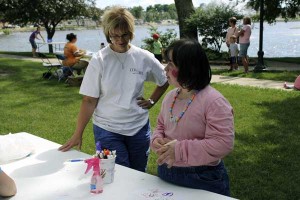 Two of the most popular workshops were the rain painting and thumbprint fireflies.

“For rain painting they use markers on a water color type paper and then spray it with water so the marker bleeds,” Davis said.

The fireflies are constructed by placing two painted thumbprints directly next to one another and then adding a pipe cleaner to the center to resemble a firefly or lightning bug.

New to this year’s event is the wishing tree. 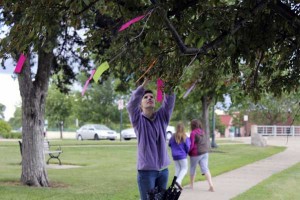 Jessica Henderson hangs a wish in the Wishing Tree at Kids Art in the Park. -- Garrett Wampler/Albert Lea Tribune

“We have a wishing tree that is new this year where people come down and write down their wishes,” Davis said. “We’re putting them in the tree and we’ll keep it up for about a week, weather permitting.”

Kids Art in the Park is funded by Parks and Rec along with other sponsors that help support the full lineup of summer activities.

“We send out letters at the end of spring to see if anybody would be interested in sponsoring any of our events,” Davis said. “A lot of these guys just give us money and we put their name out for all of our events.”

Parks and Rec have a full summer lineup of activities scheduled. Following the Kids Art in the Park event will be the Park Olympics and wiffleball tournament on Wednesday, June 29. They will also be holding a summer carnival on July 13 and a beach luau at City Beach on July 27.