Kitchen of the past 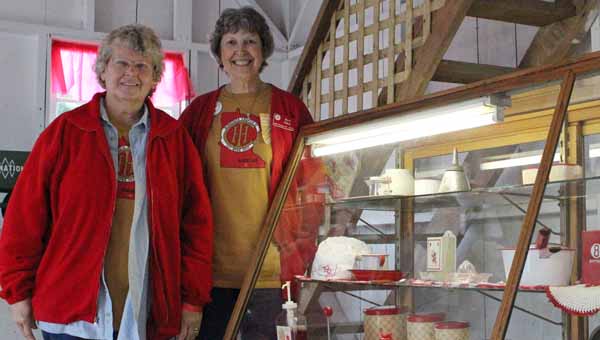 Joanne Olson, left, and Barb Olson pose for a photo near the display case they set up with various kitchen items from the '50s. The display case and other kitchen items can be found in the Heritage Barn at the Freeborn County Fairgrounds today and Saturday as part of the Red Power Roundup. -- Kelli Lageson/Albert Lea Tribune

While there are rows upon rows of tractors to see at the Red Power Roundup be sure you don’t miss some of the special pieces of history that are set up in various buildings at the Freeborn County Fairgrounds.

One such piece of history is the 1950s kitchen set up in the Heritage Barn. Sisters-in-law Barb and Joanne Olson are among the people responsible for setting up this area that makes visitors feel like they stepped back in time. 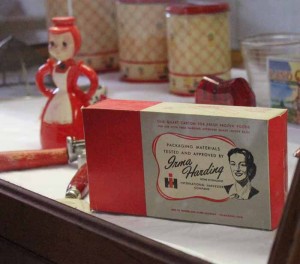 Some of the rare items in the Olsons' collection include anything that has the depiction of Irma Harding, the face of International Harvester kitchen items. On the left is a figurine that held powder for shaking onto laundry.

“We worked together to find treasures,” Joanne said.

Joanne, of Bloomington, and Barb, of Kimball, set up a display case full of items that they remember using as children. Joanne brought a pail and ladle for drinking water that she remembers sharing with her entire family.

International Harvester appliances are rare because the company began making them in 1947 and sold the line to Whirlpool less than 10 years later.

One of Joanne’s most special items is a box with Irma Harding’s picture on it. Harding could most likely be compared to Betty Crocker, in that there was no woman with that name. Actresses portrayed Harding in advertisements, and it’s not a coincidence that the International Harvester spokeswoman’s initials were I.H.

Barb and Joanne both like coming to tractor and threshing shows for the camaraderie with fellow collectors. 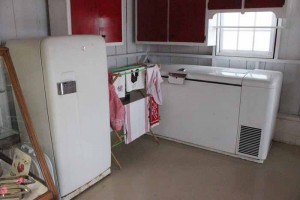 While International Harvester might be best known for making tractors and farm implements, the company also made refrigerators, freezers, air conditioners and other small appliances.

Both agreed that the people they meet at these shows are like family. Conversation comes easy with having similar interests. They also both said they felt welcomed in Albert Lea and that organizers had been easy to work with.

Both Barb and Joanne are non-voting members of the Minnesota Chapter 15 of the International Harvesters Collectors Club. Their husbands are also members.