Morneau could be headed to DL 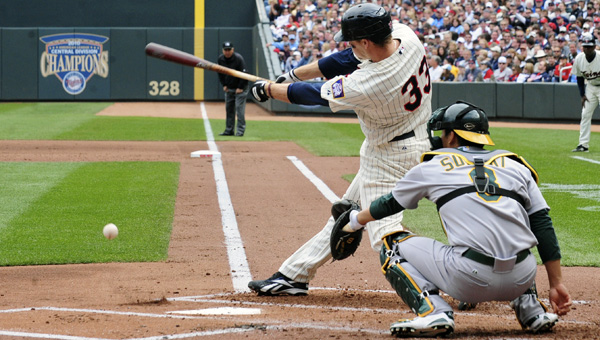 Justin Morneau could be the next of the injury-plagued Twins to head to the disabled list. -- BuckMonsonPhoto.com

MINNEAPOLIS — Just as Joe Mauer and Tsuyoshi Nishioka are getting closer to returning to the Minnesota Twins, Justin Morneau could be headed to the disabled list.

Morneau said Tuesday a cortisone shot in his left wrist has not yet taken, and the struggling first baseman says it feels as if he’s swinging one-handed. He met with a specialist, but said the team is still contemplating a course of action.

“No matter what I want to play,” said Morneau, who talked his way out of a DL stint earlier this season when he had a sore neck. “But if it comes to the point where I’m not doing myself any good or anyone on the team any good … If I’m able to play the way I want to play and the way everybody expects me to play that’s one thing, but I’m in pain and being, I wouldn’t say useless but not very good, I don’t think that does anyone on the team any good.”

Morneau is hitting .265 with just three homers and 17 RBIs this season. He’s received cortisone shots in his neck and now in his hand, a frustrating season for him after missing the final three months of last year with a concussion.

Morneau said he wasn’t sure how he injured his wrist. He said he woke up one morning during the team’s previous homestand and it was sore.

“It was weird,” he said. “I don’t know if I aggravated it on a throw up the line because it was a little sore before that. I know it was sometime in the last homestand.”

On the bright side, Mauer and Nishioka appear to be close to returning from long absences.

Nishioka played in just six games before breaking his left leg against the New York Yankees. He was scheduled to play for Triple-A Rochester on Tuesday night and could rejoin the team as soon as Wednesday or Thursday.

Perkins was scheduled to pitch for Rochester on Tuesday night and could be on his way up as well.

Twins manager Ron Gardenhire said the team has yet to decide where Nishioka will play when he does return, but all signs point to him taking over at shortstop, with the improving Alexi Casilla moving to second base.

Mauer has played in only seven games due to various leg and shoulder injuries. He is scheduled to face Nathan in a batting practice session on Wednesday in Fort Myers, Fla., and will be evaluated after that.