Ruth Henrietta Skare Silrum, 87, passed away on Wednesday afternoon, June 15, 2011, at St. John’s Lutheran Home, Albert Lea. Funeral services will be at 10:30 a.m. Saturday at Bricelyn Lutheran Church, Bricelyn. Visitation will be at Bruss-Heitner Funeral Home in Bricelyn from 5 to 7 p.m. today and one hour before the service at the church. The Rev. Luther Peterson and the Rev. Jeff Laeger-Hagemeister will officiate and interment will be held the following week at 10 a.m. Saturday, June 25, at the Clear Lake Municipal Cemetery, Clear Lake, Iowa. 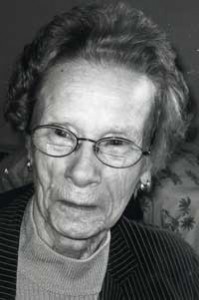 Arrangements are being completed with Bruss-Heitner Funeral Home in Bricelyn.

Ruth was born on May 31, 1924, to John and Bertha (Anfinson) Gangeness. She grew up in Buffalo Center, Iowa. Ruth was baptized at the Zion Lutheran Church in Northwood, Iowa, and confirmed at Bethlehem Lutheran Church, Buffalo Center, Iowa. She was united in marriage to George Skare on Feb. 24, 1945, in Clear Lake Iowa. In 1958 they moved to Bricelyn where Ruth cared for her two children and supported her loving husband in his work for the Chicago and Northwestern Railroad. After the passing of her husband George, Ruth married Jorgen Silrum.

Ruth enjoyed cooking, baking, caring for grandchildren, church activities, and birthday club. Her family was the most important thing in the world to her.