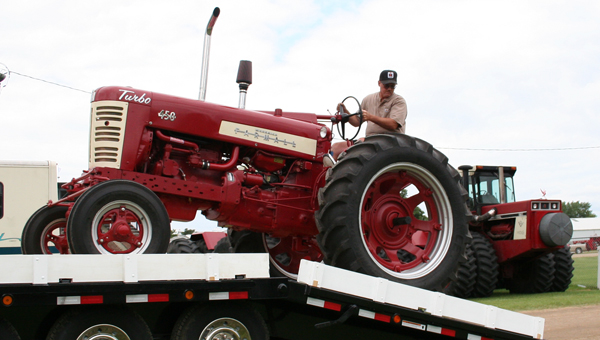 Setup for the 22nd annual National Red Power Roundup is under way at the Freeborn County Fairgrounds. 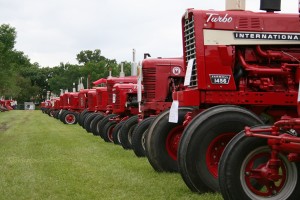 The Roundup is a three-day summer show and is being hosted by Minnesota Chapter 15 of the International Harvester Collectors Club and will run from June 23-25.

Vendors began arriving to set up on Monday and finished their preparation for the show on Tuesday.

Roundup organizers are expecting the national event to draw 20,000 to 30,000 people to the fairgrounds. Organizers also said they have registered 125 vendors.

Patrons can expect to see more than 2,000 tractors at the fairgrounds over the weekend. Along with the tractors will be a few International trucks, Scouts, Cub Cadets and various farming equipment such as milking machines.

Along with many classic demonstrator tractors there will be an original McCormick-Deering Reaper. The reaper was invented in 1831 to cut small grain crops and was a horse-drawn implement. 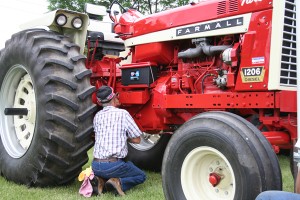 Klein said the Red Power Roundup brings out the equipment that is most heavily used in the show’s area. For southern Minnesota that’s the grain equipment.

The show will also feature a quilt show and contest as well as many other activities.

Guest have already begun arriving from out of town. Many of Albert Lea’s hotels are sold out for the weekend causing some guests to book hotels in other areas. Klein says people are staying as far away as Faribault and some are driving from Owatonna and parts of northern Iowa.

“There is a huge amount of support for this — a lot of local interest.” Linda Klein said.

The fairgrounds has also made space for visitors who wanted to camp at the event. It has gone over so well that Klein said, “It is jam packed, whatever these grounds hold is packed in.” 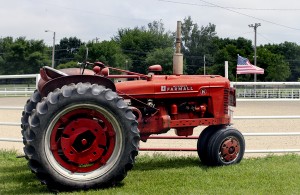 A Farmall H located next to the outside arena at the Freeborn County Fairgrounds. Patrons can expect to see more than 2,000 tractors at the fairgrounds over the weekend. -- Garrett Wampler/Albert Lea Tribune

Chapter 15 first started vying to bring the show to Albert Lea in 2008.

“If you want the show you have to bid for it two years in advance,” Klein said. “ You have to have all of your ducks in a row. It’s not just a gift — you have to work for it.”

Organizers presented their proposal to host the show at the 19th annual Roundup in Columbia, Mo. In order to be awarded the show they had to prove that they had a place that could handle a large number of people.

The last and only show held in Minnesota was the 10th annual show in 1999, which was held in Hastings.

“At that time these were not stand alone shows, in 1999 it was in conjunction with the Log House Show in Hastings,” Klein said. “This has gotten so big that they wanted a stand alone show.” 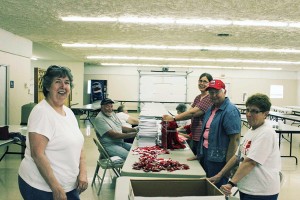 Next year the 23rd annual Roundup is scheduled to visit Du Quoin, Ill. In 2013 the show will be in Lima, Ohio. The 2014 show will be determined at a meeting on Saturday during the Roundup.

Although the show isn’t officially starting until Thursday, gates have been open for entrance since Tuesday.

If you go
What: 22nd annual National Red Power Roundup
Where: Freeborn County Fairgrounds
Cost: $10 per day or $25 for a three-day pass; children 12 and under are free with an adult
When: Thursday, Friday and Saturday from 8 a.m. to 5 p.m.