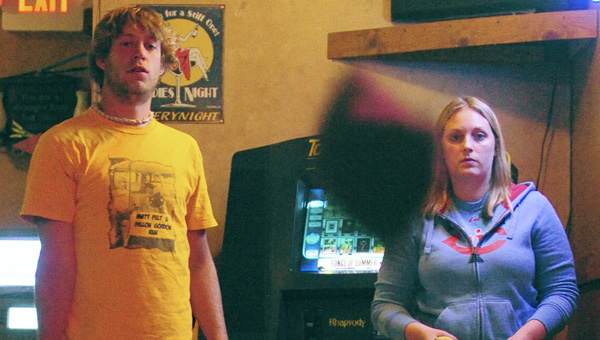 Jordan Henry, left, of Albert Lea, watches a bag he threw head toward a platform 30 feet away. Pub 69 in Twin Lakes, along with two other bars, hosts a bean bag league every Thursday night. -- Andrew Dyrdal

A bean bag league sprouted up in three local bars last summer and now has 22 teams traveling between Pub 69 in Twin Lakes, the Pourhouse in Clarks Grove and The Bend in the Road in Manchester to play each Thursday.

Bean bag is a throwing game played with a partner. Players stand opposite their partner next to a raised platform with a hole in it 30 feet away from each other.

The teams of two throw bean bags back and forth aiming at the hole. A bag in the hole scores three points, while one that lands on the board scores one point. The first team to 21 points wins.

“It’s pretty simple,” said Scott Hanna, owner of Pub 69. “I didn’t think (a league) would work in the beginning, but I was pushed into it. Now it’s almost taken over for horseshoes.”

Eight teams of various skill level played bean bags, known as bags for short, Thursday night at Pub 69. Rain almost postponed the event, but Hanna said the teams wanted to play so the boards were moved inside.

Hanna said bags lends itself to a bar atmosphere.

“The thing about bars is nobody comes to just sit and drink,” he said. “For the most part, people use the pool tables and dart machines. This is just one more thing for the summer.”

“They saw what I was doing asked ‘Can we get in on this, too?’” Hanna said.

The next summer, three teams formed a 16-team league, which grew by six teams this year.

“Four weeks before it even started this year people couldn’t for it to get going,” Hanna said. “They really enjoy it.”

Each bar has four sets of boards, and the league runs for the first week in June through Sept. 1. Each team plays seven games per night, which take 1 1/2 to 3 hours, and the team with the most wins at the end of summer is league champion. Hanna said they might implement playoffs in the future.

Each team is affiliated with one of the participating bars and the schedule is created to keep at their home bar as much as possible. There’s a $20 fee per team and winnings are paid out at the end of the year.

Hanna said there are no immediate plans to expand the league but there’s discussion on adding more teams and bars into the mix.

For now, he’s satisfied with how successful the league’s been.

“Anybody can do it,” Hanna said. “I think that’s why it’s so popular.”