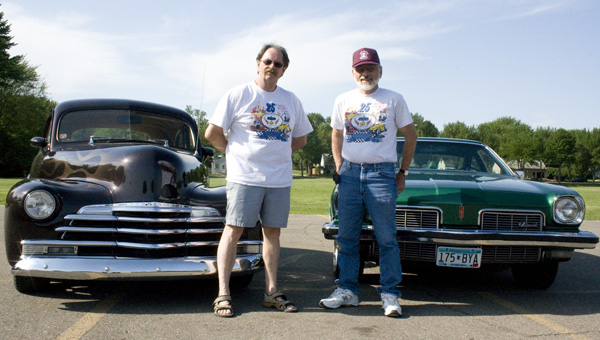 After more than two decades of preparing one of Albert Lea’s signature summer events, the Low Bucks Car Club will sponsor its 25th and last Eddie Cochran Weekend on Friday and Saturday.

Club President Ed Anderson said with a smaller, aging club population, the group is running out of people to help with the event.

During the height of the club’s years, there were as many as 125 members. Now, there’s probably only about 25 — with the average age of members between 58 and 60 years old, he said.

Former Low Bucks Car Club President Kraig Schuhmacher said it appears that younger generations in general seem to be turned off by organized activities, including clubs, service organizations and even churches. 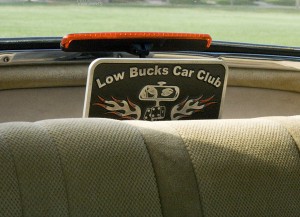 A Low Bucks Car Club plaque sits in the back of a 1948 Chevy Business Coupe owned by Ed Anderson of Albert Lea. -- Sarah Stultz/Albert Lea Tribune

And some younger people can’t afford the costs involved with fixing up an older vehicle, Anderson added.

“It’s not finances, it’s manpower,” Anderson said, of why this will be the club’s last year to sponsor the event.

Anderson and Schuhmacher said the club has already scaled back on events in an attempt to help the weekend stay alive. Events used to be held on three days; now they are on two. The club used to give out first-, second- and third-place trophies; now it gives out only first- and second-place ones.

“The club was started to have fun,” Anderson said. “The last 10 or so years, it’s turned into more of a business venture.”

As soon as one car show is held, the club begins the next month preparing for the next year’s show.

Despite this being the last year of the Eddie Cochran Weekend, there is still a full schedule of family-friendly activities planned for Friday and Saturday.

The men said they are grateful for the support they’ve received over the years.

The social will be followed by a free drive-in showing of “American Graffiti.” Anderson said this was the movie that was shown during the first year of the Eddie Cochran Weekend, so it was only fitting to show it again during the last year.

The movie will be at the Freeborn County Fairgrounds and is open to the public.

Saturday begins with the Hospice walk/run at 7:30 a.m., starting from the fairgrounds.

Registration for the Low Bucks Car Show & Swap Meet begins at 8 a.m. and goes through noon. The show goes from noon to 4 p.m.

There is a $10 registration fee per show car. Public admission to the show is $2 per person, with 50 percent of the car show proceeds going to the Eddie Cochran Scholarship Fund.

First- and second-place awards will be given out in 40 different classes at 3:30 p.m.

After the show, the line-up for the 26-mile cruise will begin at 4 p.m.

As many as 400 have attended the line-up, social and cruise in the past.

Afterward will be live music by The Cruisers.

The Eddie Cochran and Marion Ross exhibits at the Freeborn County Historical Society will be open at various times throughout the weekend, including 10 a.m. to 5 p.m. on Friday and 11 a.m. to 5 p.m. on Saturday.

Event T-shirts will also be available throughout the weekend, along with other past memorabilia.

Events will be held rain or shine.

“I enjoy this,” Anderson said. “I’ve always been a car fanatic. I’m going to miss it, I really am — all the camaraderie.”

Anderson said whatever money is left after this year will go into the Eddie Cochran Scholarship Fund, which over the years has given out at least $20,000 in scholarships to Albert Lea and area students.

Recipients have been students going to college to pursue a fine arts or music education.

The men said though the Eddie Cochran Weekend will no longer be happening, they plan to continue with the club and go back to simply having fun talking and working on cars, without all the stress of planning a major event.

The Low Bucks Car Club meets monthly and has annual dues of $5.

He started playing the guitar when he was 12 years old and toured as a country music performer with the Cochran Brothers after his family moved to California.

He made the move to rock ’n’ rock with his hit “Sitting on the Balcony,” in 1957, selling more than 1 million copies.

Cochran died on Easter Sunday 1960 when the cab taking him to Heathrow Airport crashed.