A 23-year-old Albert Lea woman has been charged in Freeborn County District Court with reportedly stabbing her boyfriend in the face with a steak knife early Monday morning.

Samantha Leah Freeman faces one count of second-degree assault with a dangerous weapon and one count of obstructing arrest. 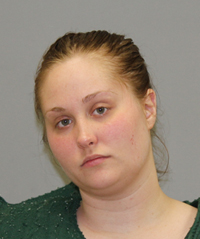 She was arrested after a reported altercation at 1208 St. Joseph Ave.

Police found out about the alleged assault at 1:58 a.m. Monday, after they received a call from the emergency room at Mayo Clinic Health System in Albert Lea. A man had a laceration on his left cheek and a bandaged arm.

According to the man, Freeman began to pound on the door. When he came out, she began punching him. He reportedly attempted to restrain her and protect himself and then left the house.

After waiting about 10 minutes, he returned to the house and then went into the bedroom. He reportedly heard Freeman attack the bedroom door again and decided to leave for the evening.

However, as he was on his way out, Freeman reportedly attacked him again — stabbing him in the face and arm.

Freeman was arrested at the residence on St. Joseph Avenue, court documents state. When officers arrived, Freeman reportedly yelled at the officers, attempted to run up the stairs and even allegedly shoved an officer.

She tested .222 on a preliminary breath test.

Court records state police found many blood stains in the house, a chair tipped over and a smashed glass table. A wet steak knife was found in the sink.

The records say there was also clothing with blood stains that was found at the house and what appeared to be a pile of human hair on the floor.

Court documents state police attempted to interview Freeman but had difficulty getting a clear description of the events from her. She reportedly mentioned events from previous occasions in which the man reportedly tried to choke her and pull her hair out.

When an officer attempted to clarify what had happened, Freeman allegedly told police she had scratched him with her fingernails. When an officer told her the explanation didn’t make sense given the amount of blood seen in the house, Freeman reportedly admitted she was lying.

Court documents state Freeman told police the man was allegedly choking her. She picked up a nearby knife. She reportedly began to feel light-headed and dizzy and then he stopped.

She said she had the knife in her hand when he charged toward her.

According to the online court records, Freeman is out of custody on a non-cash bond on Tuesday.